Measure of inclusion in schools wider than religion, says priest 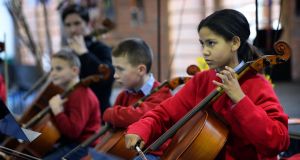 Inclusion in schools is not just about religious denomination but should also take account of nationality, ethnicity, socio-economic background and ability, according to a leading figure in the management of Catholic schools.

General Secretary of the Catholic Primary Schools Management Association (CPSMA), Fr Tom Deenihan said he believed Catholic schools were every bit as inclusive as other schools when all five criteria were taken into consideration. He said a recent ESRI report confirmed as much.

“When these five criteria are taken into consideration, I would challenge anyone to tell me that Catholic Schools are not as inclusive as any other type of school. They must be to be true to their ethos,” said Fr Deenihan.

Speaking at a Mass to launch Catholic Schools Weeks, Fr Deenihan told those gathered at Mount Mercy College in Cork a Catholic education is fundamentally not about ideas, courses, subjects or syllabi but is about people.

“People are not clones …. people and students are not ideal, not perfect, and, dare I say it, sometimes not even holy.

“Students come from different backgrounds, with different personalities and have different experiences but, like everyone else, are made in God’s image.”

He noted that Mount Mercy College was founded by the Sisters of Mercy from Saint Maries of the Isle in the city and a primary school exists at that convent still which caters for 265 pupils from 38 countries and ten different faith backgrounds, including Muslims, Hindus and Buddhists.

The school has three special Autism Spectrum Disorder Classes which are attended by 18 pupils as well as a further 39 children availing of Resource Hours while it also has 11 Special Needs Assistants in addition to 25 teachers. “Who can say that this Catholic school is not inclusive?”

Fr Deenihan said the theme of this year’s Catholic Schools Week challenged schools to “Proclaim God’s Mercy” which involved treating others with dignity, respect and forgiveness where the focus should be on the individual not on the institution.

“Catholic schools must live up to that expectation in how they treat others, how they deal with disadvantage and how they relate to society. The ideology governing such schools must not be perception, league tables or results but mercy, a profound respect for the individual.”

Fr Deenihan said the issue of league tables had come to the fore again and said such an approach to educational success was dangerous it led to a focus on the educationally gifted. Students who were not gifted were forgotten about and neglected.