McAleese will not go to confession over referendum Yes vote 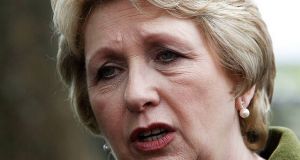 Former president Mary McAleese: ‘I had no hesitation at the end of the day, when it came to the vote. I absolutely voted ‘Yes’.’ Photograph: Getty

Former president Mary McAleese has said she voted in favour of repealing the Eighth Amendment with a “heart and a half” and that she had no intention of going to confession about it.

Mrs McAleese said she had been affected by the death of Savita Halappanavar, who she had once met. Ms Halappanavar died from sepsis at University Hospital Galway in October 2012 after she was refused a termination when she was having a miscarriage.

The former president was speaking at a We Are Church event at Gonzaga College in Dublin on Saturday.

In an interview with journalist Ursula Halligan, Mrs McAleese said she had voted in favour of the insertion of the amendment into the constitution in 1983, although she had not campaigned for it.

“I have to admit that I voted in favour of it back then because we did not actually have any statute-based law at all,” she said.

“So I thought here is an opportunity to have it clarified.”

On the recent referendum vote, she said: “Savita Halappanavar died, and her baby died. The report [into her death] implicates the Eighth Amendment. As someone who has met Savita and just thought she was pure wonderful, it just came between me and my peace of mind.”

Mrs McAleese said she had met Ms Halappanavar when she was helping to organise an event at the Royal College of Surgeons Ireland.

“She was dressed in the most beautiful Indian costume. She was just a beautiful girl. It is just heartbreaking. I have a daughter around the same age who has had two babies and you like to think if your daughter is pregnant that all will go well, and that you’re not going to follow a coffin. Two coffins, a little baby and her,” Mrs McAleese said.

“The upshot is that I voted ‘Yes’ this time around with a heart and a half,” she added. “I am a person who would have over time always regarded myself as someone who valued the life of the mother, but also the life of the little baby. But I had no hesitation at the end of the day, when it came to the vote. I absolutely voted ‘Yes’.”

Bishop of Elphin Kevin Doran and Bishop of Waterford Alphonsus Cullinan said after the referendum vote on May 25th that Catholics who voted Yes should consider going to confession.

Asked in the interview if she had done so, Mrs McAleese replied: “I have no intention whatsoever of doing so.” She said the Catholic Church had “really not come to terms with the clash between people’s human rights and canon law”.

“Times have changed. And one of the things that has changed is our understanding of our human rights. Among those human rights: freedom of conscience, freedom of expression, freedom of opinion, freedom of religion, freedom to change religion. Within the Catholic church, none of those fundamental freedoms are available fully to church members, according to canon law,” she added.

Mrs McAleese said the country was “flooded with love” the day after the marriage referendum in 2015.

She also said she would like to see the curia stop writing “those dreadful documents” and to “take a year off writing and just listen”.

She noted there were two forthcoming documents on “gender ideology”. “Because one wouldn’t be enough,” she said.

Criticising what she said was the “avalanche” of written words from the curia that they seemed to think “solves every problem”, Mrs McAleese said she believed Ireland had a lot to teach the church about intergenerational debate and respectful debate.

Asked if she would keep speaking out, she said she would do so “for as long as there is breath in my body”.

We Are Church Ireland describes itself as a group of concerned Irish Catholics committed to the renewal of the Roman Catholic Church on the basis of the Second Vatican Council (1962-1965) and the theological spirit developed from it.