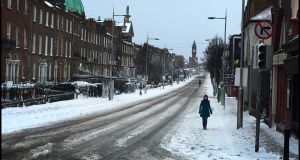 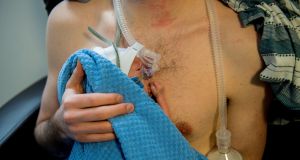 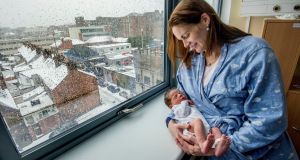 Anna Martin thought that maybe she should have named her baby after the ambulance man who was so helpful when she was rushed to the National Maternity Hospital in labour.

Instead of Andy, though, she had already chosen Benjamin as the name for her storm baby, born at 9pm on Thursday night within an hour of her arrival in hospital, weighing 3 kg (6 lbs 10 oz).

“I was probably getting twinges from about 5pm” and by 7pm Anna, from Foxrock, Co Dublin knew it was time to call the ambulance. “They arrived within 10 minutes. They were were very good.”

In the hospital by 8 pm the baby was born within an hour, a brother for Barra (3) and Chloe (20 months).

Baby Con is not a storm baby having been born 15 weeks prematurely eight weeks ago, but storm conditions forced his parents Jill Barrett and Dáire O’Neill to walk in from Stoneybatter, Dublin to spend the day with their baby as the hospital does not have accommodation for relatives.

Holles Street has had one baby named after the storm - Emma - but she has left for home.

“We’ve had an Emma, and a potential couple of other Emmas. But no Beasts,” said Dr Rhona Mahony, master of the NMH at Holles Street.

By 11am on Friday morning 52 babies had been born in the previous 48 hours, “but we’re easily coming towards the 60 mark now. About a baby an hour.”

The Army had been great in bringing in staff as well and others had come on foot, she said. “ One lady is walking in from Bray and that will take three hours.”

Midwife Maireád Markey from Neilstown, Bohermeen in Co Meath got to work with the help of a snow plough.

They had been shovelling snow to try and get the jeep out. An ESB crew told them a snow plough was due and “we came in behind the snow plough, which cleared the path onto the main road”.

Dr Mahony who has been at the hospital since Wednesday said “we had a full complement of staff last night. Not one single person called in sick which I thought was amazing.”

All elective issues at the hospital have been cancelled but Dr Mahony is “nervous about day one post acute weather” when it could be very busy. “ There’ll be no relaxing until well into next week.”

Operating as normal was only made possible “through the excellent dedication and diligence staff across all disciplines, who have made themselves available to work despite the many challenges posed by extreme weather conditions.”

“Many staff have worked over the last three nights and have not been home to their own families, which is reflective of the dedication of Rotunda Hospital staff who have acted above the norm to ensure the continued provision of safe maternity services for our patients,” the hospital said.