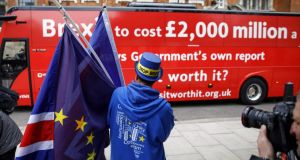 Brexit in name only?: the pro-EU Brexit Facts Bus at Westminster this week. Photograph: Tolga Akmen/AFP/Getty

The British economy slowed down in the final quarter of last year, in stark contrast to that of just about every other country in the world, where growth accelerated.

Weak economic growth during a global boom should be a problem, but in Brexit la-la land it is something to be celebrated. All it means is that the forecasts of a Brexit-induced recession were wrong. Subtle arguments about growth being lower than it would otherwise have been are brushed aside as just experts waffling on as usual.

A group called Economists for Free Trade published a report this week criticising Whitehall estimates of Brexit’s negative economic impact on the UK. The Free Traders published some very different forecasts, all positive. Experts were quick to condemn the exercise in terms of both the tools it deployed and the assumptions it used.

If you put the contents of your kitchen waste bin in a food processor, don’t be surprised if the result looks nothing like a souffle

In response one of the report’s authors gave the game away, I suspect unwittingly: “The key point here is not to debate the exact number,” Julian Jessop wrote. It is to show that alternative modelling produces very different results.” To put this valid point in a different way: “If you put the contents of your kitchen waste bin in a food processor, don’t be surprised if the result looks nothing like a souffle.”

Mark Carney, the governor of the Bank of England, is a favourite target of the Brexiteers. The UK’s central bank is regularly lampooned by Tory extremists for getting its forecasts wrong. As it happens, Carney’s forecasting record has stood up quite well. Again, this would involve a subtle analysis, taking into account that all those original negative forecasts were made without assuming, after the surprise referendum result, that interest rates would be cut, quantitative easing stepped up and government spending boosted. None of that counts, of course. All we need to know is that the forecasts were too gloomy and just wrong.

Carney is not insensitive to the criticisms and tries to be even-handed. He argues that Brexit, if done in the best possible way, need not be a disaster. Brexiteers suspect, probably correctly, that that is just a plea for Bino, or Brexit in name only, where the UK stays in the EU customs union and probably the single market as well. But Carney has also come out swinging, pointing out that the bank forecast that a vote to leave the European Union would lead to lower growth, weaker sterling and squeezed incomes. That all of this came to pass seems to be regarded as fake news by the Tory ultras.

Another feature of that postreferendum economy is a much weaker housing market. Property is not yet in freefall, so not too many headlines are being generated about collapsing prices. Again, it’s subtle and, therefore, of no interest to those, such as Boris Johnson, the British foreign secretary, with no interest in details.

Prime residential real estate in central London is where most of the problems lie: activity is very weak and prices are falling. If that continues it will spread to the rest of London and the country at large. Some London landlords are offering deals to prospective tenants: a Brexit discount if they sign a lease that goes at least six months beyond March 2019.

Bino is Jacob Rees-Mogg’s greatest fear. But cake-and-eat-it remains the central objective of Theresa May, who again this week put Conservative Party unity and keeping her own job ahead of the interests of the country and came up with a plan that everyone knows won’t work.

With only a year to go no time is left for the necessary negotiations, so we now have an admission – actually, a British request to Brussels – that the transition period will have to take as long as it has to and not necessarily be limited to the previously mooted two years.

The British seem to want to get through the next 12 months making all sorts of aspirational noises, get Brexit done and then begin the messy business of detailed negotiations – which can be successful only if there is compromise.

If May compromises ahead of Brexit it will be fatal for her premiership and potentially usher in a Labour government. Jeremy Corbyn has so far played a Brexit blinder and could well be limbering up to promise continued membership of the (or perhaps a) customs union.

The British government is betting that once the United Kingdom has actually left the bloc it will all get a lot easier and that all sides of the increasingly bitter debate will then be more willing to accept compromise. Or perhaps May wants to deliver Brexit and then leave the compromising to someone else.

Some things cannot involve compromise. The Border is one of them: there either is a Border or there isn’t. Being out of the customs union necessitates a Border. It is as simple as that. It will be the ultimate irony if the Irish Border means the only thing ultimately delivered is Bino. Perhaps, given the context, it should be relabelled Provisional Brexit.

1 Boeing identifies new software flaw in grounded 737 Max
2 Dublin housebuilder records €11m gain after striking deal with bankers
3 'My wife has a PhD in haggling. She thinks it should be an Olympic sport'
4 Irish people like nothing more than being bribed with their own money
5 GoMo is being investigated by advertising authority
6 Irish company that collects subscriptions for porn sites records €3m profit
7 Hogan warns Britain on US trade deal as EU set to impose tariffs
8 Barclays to cut 100 senior roles as lender seeks to rein in costs
9 Markets: IT group with Belfast HQ enters North’s £1bn league
10 ‘We stuck our heads in the sand for a long time’
Real news has value SUBSCRIBE