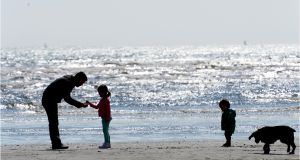 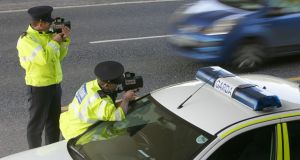 Gardaí will be operating mandatory checkpoints testing drivers for both alcohol and drugs over the weekend. File photograph: Alan Betson/The Irish Times

As the entire country prepares to ease into a long weekend we have gathered all of the latest weather, travel and events updates to help you make the most out of the May bank holiday weekend.

Wet and windy conditions are forecast for the weekend before the weather picks up on bank holiday Monday.

Saturday will see some bright spells in the east and north but overall it’s a mostly damp and windy day, according to Met Éireann.

Outbreaks of rain will become persistent by Saturday night with highest temperatures between 10 and 12 degrees.

Sunday will see more outbreaks of rain with strong and gusty winds. Most places will become dry by Sunday night with highest temperatures between 10 and 13 degrees.

Met Éireann says indications are for a “good deal of dry and bright weather” to begin on Monday, with the best of sunshine across the midlands.

However, there is a threat of patchy rain with top temperatures estimated to be around 15 or 16 degrees.

On the roads, gardaí will be operating mandatory checkpoints testing drivers for both alcohol and drugs over the weekend.

Since earlier this month, the gardaí have had powers to conduct preliminary drug tests, similar to breath testing for alcohol.

By taking a swab of a driver’s oral fluid, the presence of cannabis, cocaine, opiates such as heroin and morphine and benzodiazepines such as valium can be detected.

Minister for Transport Shane Ross appealed to all road users to take extra care over the Bank Holiday weekend.

“I am appealing to everyone to be mindful of how you use the road. In particular, I would urge drivers to be aware of the effects of alcohol on their driving, as any amount of it can impair driving and increase the risk of a collision. This is not an opinion - it’s a scientific fact,” he said.

“There were no lives lost on the roads over the recent Easter bank holiday weekend, it would be a remarkable but not an impossible achievement if we could also keep the May Bank Holiday free from road deaths.”

Falling asleep at the wheel is also a problem over bank holiday weekends and it is estimated by the Road Safety Authority (RSA) that driver fatigue is a contributory factor in as many as one in five driver deaths in Ireland every year.

To help drivers stay alert behind the wheel over the weekend, the RSA and Applegreen will provide free cups of coffee to drivers between 2pm and 8pm on Friday and Monday at participating service stations.

To date this year, 50 people have been killed on Irish roads, which is four less than in the same period last year. Two people were killed on the roads over the May Bank Holiday last year, while there were 169 arrests for drink driving.

Iarnród Éireann has warned that there will be major service alterations on some lines over the weekend to allow for track improvement works.

In Dublin, the northside Dart, northern commuter and Enterprise services to and from Connolly Station will face disruption on Saturday and Sunday, while Heuston services will also be affected on Saturday.

The rail company will operate a special timetable over the weekend on all routes and customers are advised to check timetables and book in advance online at irishrail.ie.

There is a wide range of music events taking place across the country over the weekend including the Bray Jazz Festival, which runs from Friday until Sunday and features Lionel Loueke, Maarja Nuut, Malin Wattring and The Necks.

The Kilkenny Roots Festival celebrates its 20th anniversary this year running from Friday until Monday.

The Dublin Gay Theatre Festival takes place at the Teacher’s Club on Parnell Square at 2.30pm on Sunday.