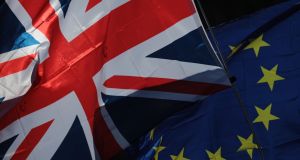 Position will not form part of the guidelines for Brexit negotiations between the EU and UK. Photograph: Luke MacGregor/Bloomberg

European leaders are working on a declaration recognising the potential for Irish reunification which is likely to be approved at this weekend’s summit of European leaders in Brussels.

Preparations are being made to ask the leaders of the EU’s 27 post-Brexit member states to endorse the idea of supporting a united Ireland after the UK leaves the EU in the event that support for Irish reunification would be favoured by a majority in Northern Ireland.

The position will not form part of the guidelines for the exit negotiations between the EU and UK but would be outlined in a separate declaration. However, it will also reiterate the EU support for the Belfast Agreement (already outlined in the draft guidelines).

The details were reported by the Financial Times last night and confirmed to The Irish Times by a high-ranking Irish official familiar with the discussions.

The official confirmed the question of facilitating Irish unity in accordance with the Belfast Agreement would not be contained in the guidelines around the Brexit negotiations but in separate documents produced for those talks.

The reference in support for Irish unity by the EU-27 leaders based around the terms of the 1998 peace accord in Northern Ireland is not guaranteed given the potential for it to encourage talk of independence in Scotland from the UK and Catalonia from Spain.

The Irish Government has constantly cited the position of Northern Ireland in contacts with the commission and other EU states in preparation for the Brexit talks. The special position of the North has been cited in both British and EU documents published in advance of the negotiations.