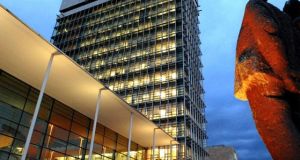 County Hall, which caters for some 700 employees, incorporates a number of fire safety measures. Photograph: Facebook.

Cork County Council is to carry out a review after it emerged that a limited amount of aluminium composite material similar to panels in the Grenfell Tower in London was used in part of its headquarters.

The council has moved to ease fears about the fire risk at its 16-storey landmark building.

According to the council, the Reynobond composite panel was installed around the external facade of the council chamber within the foyer of an extension which opened in 2006, and is attached to the tower block on the Carrigrohane Road on the western fringes of Cork city.

County Hall, which caters for some 700 employees, incorporates a number of fire safety measures including an alarm system, sprinkler protection, an automatic smoke ventilation and detection system, as well as a carefully designed means of escape, the council said.

The facilities manager and chief fire officer believe, given the limited extent of the use of the panel, the use of the building and the fire safety measures installed, the panelling meets all fire safety requirements and does not pose any increased risk.

“Notwithstanding the above, the council is immediately commissioning a report on the proper installation of the material in question and will take any further necessary action should this raise a concern of any nature,” the council said in a statement.