About 25 per cent of all sexual offences are carried out by children, conference hears 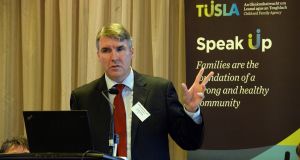 Children who sexually abuse are among the “most marginalised” and stigmatised children and must receive treatment and support, the Ombudsman for Children Niall Muldoon has said.

The conference heard that about 25 per cent of all sexual offences are carried out by under-18s.

Speaking on Friday at a conference on a new Tusla programme targeting children exhibiting sexually harmful behaviour, he said the vast majority had suffered trauma, neglect or abuse themselves. And while they and their behaviour are often seen as “unpalatable” they could no longer be “put to one side and marginalised”.

He said: “This is how Ireland has treated our different children, our awkward children, our bad children. That’s not the way to build our society in the future. Our children need to know we are going to take on the difficult piece and turn it around . . . We owe it to the other children who may be affected.”

In place since 2016, Niapp continues to be developed. The multidisciplinary service provides training, assessment and age-appropriate interventions.

The ombudsman said Minister for Children Katherine Zappone must ensure Niapp grows into “a proper system that is sustainable, not one that is going to collapse in the next economic crisis”.

Judy McCarthy, a Niapp national trainer, said it was “an incredibly traumatising experience for families” to find that their child had sexually abused. Societal judgment compounded this.

“People will assume the families could and should have known . . . the child must have experienced or seen something sexual, and that is not always the case. There is a view about a ‘good family’ and being respectable. Parents judge themselves very harshly.

“This issue transcends all social boundaries,” she added, saying many assumed it was more prevalent among marginalised, poorer communities. She said anyone concerned about their child’s sexualised behaviour should immediately contact Tusla.

Jonny Matthew, a specialist youth social worker and criminologist with the Wales Youth Justice Board, said the young people he worked with had experienced multiple adversities from a young age, including neglect, sexual abuse, mental ill-health in parents, addiction in parents, and domestic violence. Interventions with such children addressing only the behaviours would not succeed.

He described one young man, now in his 20s, who had committed a number of sexual offences in his teens, within a month. He had experienced severe neglect and violence as a child, his mother was a drug addict and she had attempted suicide twice.

Mr Matthew said it took him a year to gain the child’s trust before he could begin to address the underlying causes of the boy’s sexual behaviour. The adolescent described having “hated” being a child and never showing feelings. Mr Matthew worked with him for three years and he was now “doing okay”.

Addressing Tusla practitioners he said: “Please, please, please get behind what Niapp is doing. I can’t tell you how important it is. Early intervention is best . . . Specialist structures are best positioned to put in place bespoke interventions for the kids.”