Fintan O’Toole: Here’s how post-Brexit Ireland could turn out

It’s time to think about the unthinkable – a disintegrated UK, a reignition of the Troubles 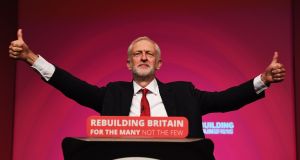 Let us consider the following scenario. In order to come to power, Jeremy Corbyn agrees a pact with the SNP. But he is still three seats short. Photograph: Leon Neal/Getty Images

So let us consider the following scenario for the unfolding of events on these islands over the next few years. It is improbable but no more so than many contemporary realities.

Theresa May agrees a fudged deal with the European Union, keeping the UK in the customs union for an extended transition period and locking it in thereafter to being a satellite orbiting the European planet. The deal, despised for different reasons by Leavers and Remainers, is rejected by the House of Commons. The British system is so paralysed that no serious negotiations are possible before time runs out. The UK leaves the EU on March 29th, 2019, with no deal.

In the meantime, May is ousted and the Tory party’s civil war becomes absolute. It splits between a moderate party led by Justine Greening and a faction of Ultras led by Rees-Mogg. There is a general election. Labour wins a narrow majority of seats in England on a radical socialist platform. But the Scottish National Party sweeps the board in Scotland and Plaid Cymru does very well in Wales. The Democratic Unionist Party (DUP) and Sinn Féin hold their positions in Northern Ireland. So Jeremy Corbyn does not have a Commons majority.

In order to come to power, Corbyn agrees a pact with the SNP. Nicola Sturgeon will allow him to become prime minister on one condition: he agrees to a new referendum on Scottish independence in 2020.

But Corbyn is still three seats short. He approaches his old friends in Sinn Féin with an offer they can’t refuse: take your seats in Westminster at least for key votes to keep me in power and in return I will instruct my secretary of state for Northern Ireland to call a border poll for May 3rd, 2021, to coincide with the centenary of partition.

At a stormy Sinn Féin special ardfheis in Dublin, Mary Lou McDonald wins the day and the party accepts Corbyn’s offer. Amid scenes of mayhem in the Commons chamber with the DUP MPs chaining themselves to the speaker’s chair, Corbyn becomes prime minister.

He takes office, however, in appalling circumstances. The no-deal Brexit is creating havoc for the British economy. There are intermittent riots by truck drivers at Dover. Food prices are soaring, causing deep distress for those who cannot afford them. The pound has collapsed, pushing up prices of imported goods.

The international markets, opposed to Corbyn’s leftist programme and spooked by the economic chaos, push up the interest rates at which Britain can borrow. Government revenues fall, leaving the new chancellor of the exchequer, John McDonnell, in constant crisis management mode. Labour’s hopes of making substantial new investments in rebuilding the welfare state are stalled.

Meanwhile, in Ireland, the no-deal Brexit has forced the Irish Government and the EU to establish customs posts on the 208 official border crossings. Dissident IRA members have blown up some of these posts and fired shots at unarmed customs officers, forcing the State to place troops on the border to try to protect them. The dissidents also ramp up street violence aimed at Protestants and the PSNI as they did in Derry in the summer of 2018.

South of the Border, the no-deal Brexit causes a severe economic shock. Small and medium-sized companies, especially in the agrifood sector, struggle and many of them lay off workers. International confidence in the Irish economy wanes because of the uncertainties of Brexit and the border poll. Property prices, overinflated in the previous years, decline sharply, deepening the sense of economic anxiety.

In this atmosphere, many begin to openly question the wisdom of the border poll: can the Republic really take on the fiscal costs and political turmoil of a United Ireland?

Back in England, Corbyn, already embattled, faces a ferocious onslaught from the right-wing press and the Rees-Moggian wing of the Tories for selling out the union. He is denounced as a puppet of the slimy Scots and the murderous Shinners. He responds in the only possible way.

He knows that English attachment to the union is in fact extremely weak, so he comes out explicitly and says that the union is a clapped-out concept: “I speak for England and for the English people.” He galvanises a hitherto incoherent English nationalism by appealing to a dream of building the new socialist Jerusalem in England’s green and pleasant land.

In this atmosphere, the SNP wins the Scottish independence referendum in 2020. Corbyn accepts and indeed embraces the result as the prelude to the creation of an independent England. Talks begin on the formal dissolution of the Anglo-Scottish union of 1707. They are still proceeding in May 2021 when the border poll takes in Ireland. Given the now established fact of the breakup of the union, 51 per cent of the voters in Northern Ireland vote for Irish unity.

But on the same day, as required by the Constitution, there is a referendum in the South as well. A united Ireland has been supported by all the main political parties but it has become obvious in the course of the campaign that voters in an economically depressed country do not want to pay the €11 billion a year subsidy for the North. Senior economists have pointed out that, with €200 billion public debt hanging over from the last crisis and the international money markets pushing up rates for new Government borrowing, it is a case, not of “won’t pay” but of “can’t pay”.

Rising levels of street violence in Belfast and Derry, alongside threats from masked Loyalist groups to bomb Dublin, add to these anxieties. In the quiet of the polling station, 51 per cent of voters in South tick the box that says No to a United Ireland.

And what then? Where do we go if the United Kingdom is over but a United Ireland cannot take its place? A crazy question, of course. None of this could really happen, could it? Well, all we can say is that it is within the bounds of possibility.

And given what has already happened inside those ever-expanding limits, it might be wise to think about it.