Martin McGuinness ‘an example’ of how to protect fragile peace process

Reaction: Rev Latimer says life is about the man you become and McGuinness ‘finished well’ 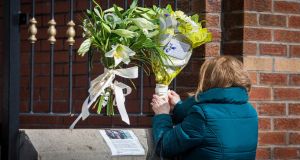 A woman leaves flowers at the gates of the Sinn Féin office at Connolly House, in Andersonstown, Belfast following the death of Martin McGuinness. Photograph: PA

From most people there was a genuine sense of loss, sadness and sympathy after news broke that Martin McGuinness died early on Thursday morning with his wife Bernie and his family around him in Altnagelvin Hospital in Derry.

The reaction reflected the complexity of McGuinness and of Northern Ireland itself - and of how his warm personality and generosity of spirit softened the hostility of some, though not all, of his most bitter opponents.

There was also acknowledgment that here was a man who for some 25 years was a senior commander of an organisation that killed 1,800 people, notwithstanding that he claimed to have left the IRA in 1974.

But first and foremost nearly everyone observed the Irish protocol of condolences to the bereaved. Even Jim Allister, leader of the hardline Traditional Unionist Voice party allowed: “Naturally, the passing of anyone causes grief and sorrow to their family and friends. All such families deserve condolences.”

And naturally too Allister then went on to say McGuinness “lived many more decades than most of his victims” and that his “primary thoughts are with the many victims of the IRA who never reached the age of 66”.

Still, Allister maintained a certain etiquette that he might not have offered to some other republican figures.

Arlene Foster noted how she and McGuinness were the only two politicians who had served continuously in the Northern Executive from 2007 up to its dissolution over the Renewable Heat Incentive (RHI) scheme.

She offered sympathy to his family and in a measured statement added: “History will record differing views and opinions on the role Martin McGuinness played throughout the recent and not so recent past but history will also show that his contribution to the political and peace process was significant.”

Callers to BBC Radio Ulster’s Stephen Nolan Show linked McGuinness to Troubles horrors such as the IRA in 1990 using Patsy Gillespie as a “human bomb” in Derry to kill him and five British soldiers; how the Enniskillen Remembrance Day bombing of 1987 ultimately claimed 12 lives and injured scores more; how in 1986 McGuinness allegedly lured alleged IRA informer Frank Hegarty back to his native Derry to be murdered after - reportedly on bended knee - promising his mother he would not be harmed.

Lord (Norman) Tebbit, who was badly injured and whose wife Margaret was paralysed in the 1984 IRA Brighton bombing that killed five people, said the world was now a “sweeter place” with his death.

There will be more such responses in the coming days providing a counterweight to the stories of McGuinness’s pivotal place in the peace process and of how he made the transition from paramilitary to peace-maker, of how he forged a miraculously and mysteriously friendly “Chuckle Brothers” relationship with Ian Paisley.

But the general tone so far has been respectful, even from those such as Alan McBride who have particular reason to be aggrieved by the actions of the IRA.

McBride, who lost his wife Sharon and his father-in-law Desmond Frizzell in the IRA Shankill bombing of 1993, offered a wise view. “You have to weigh up his whole life,” he told the BBC.

He agreed that, yes, McGuinness’s “finger prints are all over the Troubles” but they were “also all over the peace process”.

McBride also was mindful that it must have been a disappointment to McGuinness that after almost 10 years of uninterrupted devolution that his final political act was to bring it crashing down over RHI.

Ian Paisley’s widow Eileen also was thoughtful. She paid tribute to McGuinness and his family and the friendship and support he had shown to her husband when he was First Minister and later when he was ill.

She added that she was not “minimising” the hurt caused by both republican and loyalist paramilitaries but said people can have Damascene conversions. She didn’t quite compare McGuinness to Saint Paul but noted that the saint persecuted Christians and yet became a great apostle.

“If God can do that to one man He can do it to any man or any woman or any young person whoever they are,” she said.

Baroness Paisley said “God is merciful” and agreed with the view of her son Ian who said: “How someone ends their life is much more important than how they begin it.”

Dr Latimer generated controversy when at the Sinn Fein ardfheis in Belfast in 2011 he described McGuinness as “one of the true great leaders of modern times”.

“I am aware that not everyone will see Martin through the lens that I am able to view him because I have got to know him and I have got close to him,” Dr Latimer told the BBC on Tuesday.

“It is not always as we once were. If we concentrate on the person that we know from the past we fail to see who that person has become now,” he said.

Dr Latimer added, “It is about finishing, and I want to say very publicly and confidently and very hopefully to Bernie and the whole family that Martin McGuinness, a man of the people, has finished well.

“He has offered us a basis for continuing to build a foundation that is going to help this little fragile peace process of ours if we pay attention to the way he did things and the way he conducted himself as a politician. I think he has left an example that will allow us to move forward into the future with the torch burning a little more brightly.”