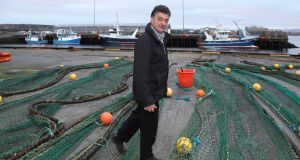 Cathal Groonell, managing director of Iasc Mara Teo, at Ros-a-Mhíl Harbour: catches handled by his firm are sold to markets across Europe, north Africa and the Caribbean. Photograph: Joe O’Shaughnessy

Connemara fish factory manager Cathal Groonell would be justified in feeling nervous about Brexit as Britain is a key market for Irish seafood, and 38 per cent of the Irish catch is taken from the waters around its coast.

Also, there are serious fears within the Irish industry about the impact of EU vessels, should they be expelled from British waters, opting to focus even more efforts on Ireland’s rich marine resource.

The Department of Agriculture, Food and the Marine is working with Bord Iascaigh Mhara (BIM) and Bord Bia on the food sector impact, and BIM has set up a domestic council among seafood companies relying on the British market.

However, the catches handled by Mr Groonell’s company, Iasc Mara Teo, are sold to markets across Europe, north Africa and the Caribbean.

Mr Groonell’s company has been in Ros-a-Mhíl, south Galway, since the 1970s. It employs 30 people directly and has an annual turnover of €5 million. Another 30 people are employed indirectly in services.

“We handle two pelagic species, mackerel and herring, mainly, and quite a bit of that herring comes from the Celtic Sea and a very fertile area known as the Smalls between Waterford and Cornwall, ” Mr Groonell said. “So that would be a negative.

“Ireland also has a big prawn fishery which overlaps into British waters, but most prawns tend to be packed and frozen on board, landed in pallets and shipped off to Spain and Italy. ”

The silver lining he sees for a hard Brexit relates to mackerel, Ireland’s most lucrative fishery, with a quota worth €64 million in 2016, according to BIM.

“Currently, the Irish mackerel fleet is fishing around Shetland, as the migratory fish tend to be very far north when the season opens on January 1st.

“This fish will be landed into Norway, into Lerwick in the Shetlands or Peterhead in Scotland, with no return then to Ireland.

“If Britain pulls out of the Common Fisheries Policy (CFP), and there is no bilateral deal, these boats will have to wait till the mackerel shoal moves down towards the Donegal coast – and that means then landing into Irish ports, benefiting Irish factories.”

The critical question is which factories will benefit. Official Government policy – as reiterated in April last year – states that quota is a public resource and is managed to “ensure property rights are not granted to individual operators”, while EU policy requires equal quota distribution on social, economic and environmental grounds, he says.

However, large fishing companies in the northwest control most of the important mackerel quota, leaving just 4 per cent of caught quota shared between four factories in Iasc Mara in Ros-a-Mhíl, and Dingle, Co Kerry, and Castletownbere and Baltimore in Co Cork.

The four factories, employing more than 240 people, have appealed to Minister for the Marine Michael Creed to initiate a pilot scheme which would allocate a percentage of mackerel quota – at 14 per cent initially – directly to the factories to ensure a coastal benefit.

“It is critical to our survival, and that is a matter for Mr Creed, rather than Theresa May, ” said Mr Groonell.