Marking the Norman invasion of Ireland: 850 years and counting . . .

Invasion on May 1st, 1169, constituted one of the most significant events in Irish history 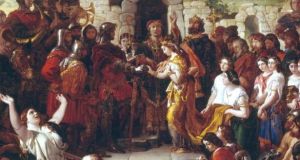 The Marriage of Strongbow and Aoife: a detail from Daniel Maclise’s vast painting. Copyright National Gallery of Ireland

Trinity College Dublin’s Department of History will host the National Conference on the history of the invasion. Invasion 1169 runs from Thursday, May 2nd to Saturday May 4th, is open to the public and free of charge. https://www.tcd.ie/medieval-history/assets/pdf/invasion/Programme.pdf