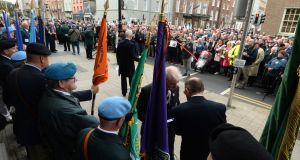 A group representing members of the Defence Forces, pensioner members and their families is targeting local and European election candidates with a number of demands such as the restoration of austerity era cuts.

The Defence Forces Family Political Forum is seeking to encourage strategic voting and says it is the first time the “military family” will have organised itself for voting purposes.

It is claimed that there are between 200,000 and 250,000 serving and retired members of the permanent and reserve Defence Forces and their families. A forum set up last autumn in an attempt to influence how these people vote has now set out a list of four “asks” of political parties and candidates ahead of the May 24th elections.

These are that military advice to the Government continues to be the “sole preserve” of the Defence Forces General Staff; that all Defence Forces allowances are restored to pre-crash levels and that a standing commission to review pay levels for members be established; and that the Defence Forces Chief of Staff takes over as accounting officer for defence budgets from the secretary general of the Department of Defence, as is currently the case.

The last “ask” is that the Permanent Defence Forces be at least 10,500 strong at all times, the Army should be comprised of three brigades headquartered in Dublin, Cork and Athlone, and that a Reserve Defence Force with a “wide geographical spread” should be re-established.

Of the “four asks”, retired Brig Gen Ger Aherne said: “This is targeted at political parties, political groupings, and individual candidates in the European and local elections.

“If endorsed by them and included in their manifestos and literature we will inform the military family of whom is supporting us and... who is not.

A ‘Respect and Loyalty Parade’ takes place in Cork on May 4th, three weeks out from the European and local elections.

“While a major breakthrough on influencing the military family on strategic voting is a work in progress, it is felt that momentum in building, awareness of the perilous state of the Defence Forces is now widespread, and the military family will no longer tolerate political and institutional flattery but not respect,” retired Brg Gen Aherne said.