Many tourism, hospitality sector businesses ‘teetering on brink’ of collapse 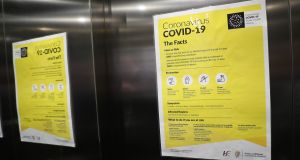 Paul Kelly, chief executive of the State tourism authority, said it had seen ‘a small number of insolvencies to date’ in the industry, which has been shut or curtailed due to Covid-19 restrictions for much of this year. Photograph: Nick Bradshaw/The Irish Times

Many businesses in the tourism and hospitality sector are now “teetering on the brink” of collapse due to the coronavirus pandemic, officials from Fáilte Ireland told an Oireachtas committee.

Paul Kelly, chief executive of the State tourism authority, said it had seen “a small number of insolvencies to date” in the industry, which has been shut or curtailed due to Covid-19 restrictions for much of this year.

The tourism official warned the sector faced a sharp increase in the number of businesses closing from the start of next year. “We are seeing that more and more of those businesses are teetering on the brink,” he told the Oireachtas committee on media, arts, and tourism on Wednesday.

Due to the national lockdown hotel occupancy rates in November had expectedly been “way way below” levels needed to cover other fixed costs, Mr Kelly said. The hotel and hospitality sector’s expectation heading into January and February was “very grim,” he said.

From the 6th January the Government has signalled it intends to reintroduce restrictions on non-essential travel between counties, due to be lifted for a two-week period around Christmas.

Those travel restrictions, coupled with the start of the year being a traditionally quiet period for the tourism sector, is likely to heap further pressure on businesses.

“That is always the worst time of the year anyway until the season gets going after St Patrick’s Day,” Mr Kelly said. Hotel owners and other hospitality services would now be facing into the difficult period with “nothing left in reserve,” he told politicians.

In some cases banks had been “supportive and flexible” with businesses in the tourism industry, Mr Kelly said. Yet in other cases lenders were expecting businesses to make full payments as normal, which he said was “clearly unsustainable when businesses can’t trade and can’t get any revenue.”

Niall Gibbons, chief executive of Tourism Ireland, which promotes Ireland as a tourist destination abroad, said inbound tourism from “long haul” markets was unlikely to return until “2022 and beyond”.

There was still a “big cloud of uncertainty that is out there” when it came to the return of international tourism, he told the committee. The capacity of Ireland’s regional airports, like Knock and Shannon, to recover after the huge downturn in the aviation industry would be crucial, he said.

Fáilte Ireland is currently running four grant schemes for businesses in the tourism sector, for general Covid-19 adaptation costs, and others aimed at bed and breakfasts, inbound travel agents, and coach tourism. Officials said it was hoped €54 million would be distributed to over 12,000 businesses under the schemes.

Fianna Fáil Senator Malcolm Byrne told the committee hearing that golf tourism had been “significantly hit” during the pandemic.

Mr Kelly said the State body was keenly aware that it needed to support travel agents who organised golfing trips bringing tourists from abroad to Ireland. “There are some golf courses, not all, for whom that international revenue is absolutely the mainstay of their finances,” he said.

“They are really struggling at the moment and they will need some form of support. We don’t want those trophy courses going out of business,” he said.