Gardaí to prepare file for the DPP after releasing €500,000 pension fraud suspect 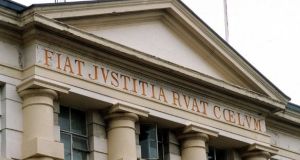 Bridewell Garda station in Cork: The suspect was arrested at the GPO on Oliver Plunkett Street Cork city centre just after 9am on Friday and released later that night.

A man suspected of committing a €500,000 fraud by continuing to draw old-age pension payments for both his parents after they died has been released without charge.

Gardaí are to prepare a file for the Director of Public Prosecutions after releasing in the 57-year-old.

The suspect from Cork’s northside was arrested at the GPO on Oliver Plunkett Street Cork city centre just after 9am on Friday and brought to the Bridewell Garda Station for questioning about the fraud.

The man was detained under Section 4 of the Criminal Justice Act, which allows gardaí to detain suspects for up to 24 hours, but he was released without charge on Friday night. Gardaí will now prepare a file on the matter for the DPP.

Officials from the Department of Employment Affairs and Social Protection became suspicious when the man was asked to produce proof his father was alive in order to qualify for the Centenarian’s Bounty from President Michael D Higgins.

The Centenarian’s Bounty involves the centenarian receiving a payment of €2,540 and congratulatory letter signed by President Higgins on their 100th birthday once they have satisfied the department as to the veracity of their claim.

Officers believe that the man collected about €520,000 in total in the pension fraud, which stretching back some 33 years, is believed to one of the longest of its kind uncovered in the history of the State.

The man’s arrest follows a joint investigation by the Garda and the Department of Employment Affairs and Social Protection (DEASP) who notified gardaí of their suspicions about the man’s fraudulent claims.

Gardaí and officials from the DEASP carried out a follow-up search of the man’s family home on Cork’s northside on Friday and seized some €9,800 in cash which they believe is the proceeds of his suspected fraud.

Det Insp Danny Coholan of Anglesea Street Garda Station said: “Gardaí and the Department of Employment Affairs and Social Protection have a long standing relationship, which aims to target those who attempt to defraud the State.”