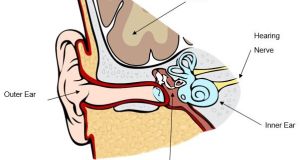 About one-quarter of people with tinnitus report it is distressing and debilitating. It can be linked with social withdrawal, an inability to concentrate, an avoidance of loud places, anxiety, depression or – in about 1 per cent of cases – suicidal ideation.

An Irish made tongue-stimulation device has proved effective in treating 80 per cent of people suffering from tinnitus in clinical trials in Dublin and Germany.

The effectiveness of the device, which was designed by Neuromod Devices Ltd in Dublin’s Digital Hub, has been measured in an international clinical trial.

The trial involving 326 people with tinnitus took place in Dublin’s St James’s Hospital and at the University Hospital Regensburg, Germany.

“Most patients with tinnitus have some hearing loss,” said Brendan Conlon, ENT surgeon at St James’s Hospital, who led the Dublin part of the trial.

Tinnitus is a debilitating condition where people hear constant ringing or noises in their ear and it affects an estimated 490,000 Irish people.

The most important factor associated with tinnitus is hearing loss, and it affects more older people, but stress is also a big driver.

About one-quarter of all people with tinnitus report that their condition is distressing and debilitating and severely impacting their lives. It can be linked with social withdrawal, an inability to concentrate, an avoidance of loud places, anxiety, depression or – in about 1 per cent of cases – suicidal ideation.

People with tinnitus report hearing sounds in their ear, such as ringing or whistling sounds, that do not originate from the environment.

It was originally thought by researchers to be a problem with the ear, but in recent decades they have seen it as more of a brain problem.

“We think it is coming from abnormal firing in the auditory processing centres,” Mr Conlon explained. “If you can imagine it is like a river when in flood, out of its course, and we are trying to direct it back into its normal firing.”

There are two types of tinnitus. The objective form is caused by something measurable, such as a blockage in the artery close to the auditory nerve. In these cases, people might report hearing the sound of their heartbeat.

The subjective form is when people hear a range of sounds in their ear all the time, but there is nothing that can be physically measured to explain it.

One of the difficulties for doctors and researchers when it comes to tinnitus is that there it cannot be measured by an MRI or another other type of scan. The only way to assess symptoms is through patient questionnaires.

The Lenire device, which was designed by Stephen Hughes and Ross O’Neill, two biomedical engineers at Neuromod, is about the size of an iPhone, with headphones attached and a lollipop-like attachment protruding from it.

Neuromod had initially approached Mr Conlon to seek his thoughts on their device, and this led to two studies with a prototype involving first 20, then 50 people.

The results from these two small trials were promising enough for the company to seek, and get funding, to do this much larger, international clinical trial.

These latest results on Lenire, which were published in the Science Translational Medicine, showed big improvements for most patients.

The improvement in clinical symptoms happened rapidly, inside the first six weeks of treatment, Mr Conlon noted – which is considered a rapid improvement.

The patients were monitored six months after treatment, and then after a year, he said, and the symptoms were still showing big improvements.

“On our THI (Tinnitus Handicap Inventory) improvement score,” he added, “Of the patients who completed the treatment, the average THI was 14 points.”

“If you get a seven-point change in the THI the patient reports feeling better; we were getting a 14-point change at three months.”

Mr Conlon believes the device is driving lasting changes in the brain. “If you get the river back on course,” he said, “then it will tend to continue in that course.”

Patients in the trial wore the headphones, and inserted the “lollipop” in their mouths, and received stimulation through these two sources for half an hour in the morning and evening, for daily, over a period of 12 weeks.

“The device works on the principle of bimodal neuromodulation,” explained Mr Conlon. “There are two different inputs into the brain; auditory into the ear, and neural electrical stimuli into the head,” he added.

“If you can imagine it is like a river that is out of course, in a flood, and we are trying to direct it back onto its normal firing,” he said.

The Lenire device is available at the recently established Neuromod Clinic based at the Hermitage Medical Centre in Dublin – people can refer themselves to the clinic or get a referral from their GP.