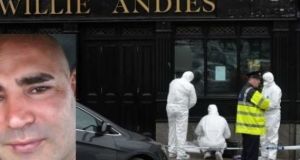 A man has been found not guilty of murder but guilty of the manslaughter of his friend during a row over a pint in a Co Cork pub last year.

A jury of six men and six women took more than six hours at the Central Criminal Court sitting at Anglesea Street Courthouse in Cork to acquit Dineen of murdering the father of four. They found him guilty of manslaughter.

Dineen, a father of five, sighed with relief when the jury returned its verdict and blessed himself before breaking down in tears in the packed courtroom where his relatives and those of the deceased had gathered.

Prosecution counsel Tim O’Leary SC said the State would need an adjournment to allow for the preparation of a victim impact statement from the O’Donnell family.

Defence counsel Brendan Grehan SC said he believed Dineen would benefit from a probation report and a report from the Governor of Cork Prison, where he has been on remand since he was charged on June 3rd, 2018.

Mr Justice Alexander Owens acceded to both applications and remanded Dineen in continuing custody to appear at the court in Dublin for sentencing on March 2nd.

Mr Grehan said his client wanted to express his apologies and sorrow to Mr O’Donnell’s family for what happened on the night in question.

The jury heard evidence during the 10-day trial from former State pathologist Prof Marie Cassidy that Mr O’Donnell died from inhaling his own blood and teeth after he suffered serious injuries to his face and head.

She said he had lost seven teeth in the assault and she found one of these lodged in his trachea and another lodged in the bronchi leading to his left lung. His nose had also been fractured and flattened.

The injury to his nose and the loss of his teeth had led to extensive bleeding into his mouth when he was knocked to the ground and he fell unconscious when his head hit the hard tiled floor of the pub, she said. This led to blood blocking his airways, resulting in hypoxia or lack of oxygen getting to his brain and because he was unconscious his gag reflex or his ability to gulp up the blood to clear his airways had been inhibited.

Dineen told gardaí when they interviewed him following his arrest that he was friends with Mr O’Donnell but that they both had been drinking and a row broke out over a pint.

“Everything was grand, good form, everything was fine. He started off that, ‘You robbed my pint, you owe me a pint’. Then he just hit me in the side of the ear, in the back of the ear and he wrestled me to the corner to the chairs.

Asked how much force he used during the fight, Dineen told gardaí: “I could not say, I was very drunk, like, you know. I would not have been able to use normal force. I was very drunk. He is a big strong boy, like.

“A good friend of mine is dead over a drunken row in a pub...Life is too hard to be trying to make a lie or a mockery over the death of a friend. I feel very numb at the moment. There is a man dead. I am very very very sorry.”

Barmaid Theresa Walsh told the court how a row broke out in the back bar between the two men at around 10pm and she found Mr O’Donnell lying on his back on the floor with Dineen punching him in the head.

“I screamed at him to stop but he would not stop. It felt like hours, it was probably only minutes because I have never seen anything like that before in my life. I was shouting at him but he could not stop himself. I was screaming.

“Mr Dineen was screaming. He asked me to go in and get him water. I gave him a pint of water. He was standing over Mr O’Donnell and he threw it over Paddy. There was no movement from Paddy.”

Ms Walsh’s partner, John Doyle, said he spoke to three or four men including Dineen and Mr O’Donnell about getting a bit noisy prior to the violent incident, and the two of them were talking before the row started.

“I heard words. Then I heard a thump and a bang. I ran out straight away. Well I walked over. That was when it all kicked off. I saw the deceased - I saw the accused kneeling over him punching the daylights out of him in the face.

I said, ‘Stop it now’. (The accused said) ‘Get the f**k away if you don’t want the same to happen to you.’ All hell broke loose. People were running and screaming I saw a lot of blows - just two fists to the face and head.

“The man was just lying there in an awful state. There was blood everywhere. He was lying in a pool of blood,” he said, adding Dineen left the pub only to return and kick Mr O’Donnell two or three times in the groin area.