Flyers on flirting? The tricky issue of sexual consent on campus

Boundaries around consent on college campuses are changing. But are we are at risk of reducing flirtation to an anxiety-ridden affair? 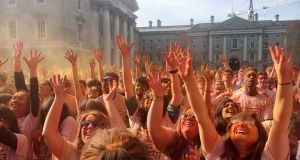 Students of Trinity College Dublin: a nationwide study found that one in eight students had had an unwanted sexual experience during their third level years. Photograph: Alan Betson / The Irish Times

The rules of the dating game are changing. For Trinity College students in Dublin nightclubs, it can help to have a flyer with advice on sexual consent close to hand. It spells out in an easy acronym: FRIES or “freely-given, retractable, informed, enthusiastic and specific”.

“People go around asking for a crisp and go through the acronym and are able to recite it verbatim. It’s become a part of their life, even if they joke about it in other contexts. Which is really cool,” she says.

“There are also people on nights out with the flyers. A girl from halls told me that a guy was trying to flirt with her and took the flyer out of his back pocket to show that he was following each of the steps,” she says.

In the movies, sexual consent has always gone something like this: the lights dim, the mood swells, two people glide towards each other, silently, knowing what the other wants. Consent is implied but never spoken.

In real life – and on college campuses – there’s a growing recognition that what constitutes consent can be wildly complicated, frequently misunderstood, often ignored.

There have always been grey areas. But experts say they see growing signs that a new generation is eager to set clear boundaries and call out unwanted sexual advances.

Debates on sexual consent, the reaction to Harvey Weinstein and the #MeToo campaign are the latest evidence of a generational shift in attitudes around sex among young women.

“I think the landscape has changed,” says Trish Murphy, Trinity College student counsellor and psychotherapist. “Certainly women are more focused on voicing what they want and don’t want. That’s definitely a change.”

However, there is also some concern that in our rush to define sexual boundaries that we may be at risk of reducing flirtation to a joyless and anxiety-ridden affair.

Some point to US colleges, for example, which increasingly have thick handbooks full of sexual assault resources, filled with pages upon pages of legal definitions and situational scenarios.

“It could get to the stage where you have to look up your consent handbook before you flirt,” says Stella O’Malley, a psychotherapist and author. “It can be difficult for young men and I don’t envy them.”

Critics labelled it as neo-puritan preaching that would treat all young men as potential sex offenders.

The response from many of those involved, however, is that it has been a positive and empowering experience.

Trish Murphy, who was involved in delivering the classes, says they were valuable exercises with many getting on board and learning about “positive sexuality”.

“We explored how hard it can be to say no for millions of reasons, and how difficult it can be for guys trying to know whether they are reading the right signals or not.

“It was great fun. You want them to be fun, playful and interesting, rather than too heavy,” Murphy says.

The classes are not mandatory, as originally sought by the Trinity Students’ Union, but students are encouraged to attend.

Skelly, a student and one of the lead organisers of the first round of classes in her then role as Trinity Students’ Union gender equality officer, says most students were happy to take part. “There were a few people who were trying to take the piss out of it, and weren’t really engaging,” says Skelly.

Most, however, did engage: “Even the people who said they had the knowledge beforehand felt that it was useful to even just have the conversation. A huge part of it is to even just allow students a space to sit and think about it.”

Consent classes seem to be gaining traction in other colleges. NUI Galway, the first university to introduce them, says they have been operating successfully. Others are adopting them or considering doing so. However, last February, UCD’s students’ union cancelled its plans for classes because of a lack of interest, with just 20 students taking part.

Nevertheless, research indicates there is a problem on campus around sexual transgression. Replying to a 2014 student survey, one in four females then studying in Trinity and one in 20 male students, had a non-consensual sexual experience during their time at university.

In 2013 a nationwide study by the Union of Students in Ireland found that one in eight students had an unwanted sexual experience during their third-level years. The numbers have prompted concern that the easy access to pornography online may be contributing to distorted ideas among young men on what is, or is not, appropriate sexual behaviour.

Stella O’Malley, however, says she has seen little solid evidence to show that men are behaving badly more often. Rather, she feels, women are getting better at standing up for themselves.

“I think there was just as much transgression as before. If anything, I would say there’s a lot less now, but women are talking about it more. It’s stunning how little we’ll take these days,” she says.

“When I was young, you were told in a funny kind of way not to be a baby; you can handle a leering man. It was almost as case of ‘are you not adult enough to handle it?’ That is all changing now.”

Despite the importance of the issue, there is a dearth of up to date research available on sexual behaviour and how we compare to other countries, say experts.

Prof Hannah McGee of the Royal College of Surgeons Ireland was a co-principal investigation in the last major study on the topic, the Irish Study of Sexual Health and Relationships (2006).

“Are we skulking around, fumbling and furtive about sex? I don’t think so,” she says. “The temptation is to think that we are so old fashioned and that we need to get our act together. But Harvey Weinstein shows that bad behaviour goes on everywhere, even in Hollywood. It can happen in plain sight.”

The evidence suggests Ireland has caught up with European attitudes to sex within a relatively short period of time.

“We have become like other countries very, very rapidly in terms of our attitudes to sex,” McGee says.

More liberal behaviour, however, does not always go hand-in-hand with more liberal attitudes.

“If you look at the research, the age of first sex has been coming down. But the proportion of people saying they’d like to have waited longer is increasing,” she adds.

One potentially worrying trend picked up on another major survey is the proportion of young people experiencing some form of sexual violence, such as rape or sexual assault.

The landmark Sexual Abuse and Violence in Ireland study (2002) – of which McGee was lead author – indicated that while childhoods were safer, more young people were experiencing some form of sexual violence.

McGee feels this is an area worth a follow-up. Recently, however, it emerged that a follow-up study which had been previously promised by the Government has now been shelved.

The fact that young women and men, meanwhile, are increasingly discussing issues around sex in the open is seen by most as overwhelmingly positive.

“These can be difficult topics to discuss,” says Trish Murphy. “If our young college students are begninning to talk about [it], then I’d love for it to extend to families, sisters and brothers.... That’s the kind of change that’s needed.”