'Atlas of the Irish Revolution' struggles to meet demand 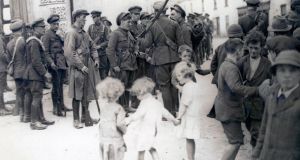 Atlas of the Irish Revolution: the book includes this image of National Army soldiers and barefoot children after the taking of Bruff, Co Limerick, from the IRA in August 1922. Photograph courtesy of the National Library of Ireland

One of the biggest and most expensive books published in Ireland this year has turned out to be a huge success.

Atlas of the Irish Revolution has nearly 1,000 pages, weighs 5kg and costs almost €60. Cork University Press thought 8,000 copies would be enough for the run-up to Christmas when it launched the book, in September, but that print run has sold out, and another 14,000 copies have been ordered.

The publisher based its sales forecast on the success of its Atlas of the Great Irish Famine, which sold 4,000 copies, “but demand has been incredible”, its publications director, Mike Collins, said.

The extra 14,000 copies will not cover booksellers’ existing orders, but they are the most that can be produced in time by Printer Trento, a specialist company in Italy. The consignment will weigh in at 70 tonnes when it arrives in Dublin, on November 15th.

“The orders on hand at present are far in excess of this reprint, and so an allotment will have to take place,” Mr Collins said. “The size of these orders is not necessarily a reflection of the demand that the booksellers have experienced. It is more that they are attempting to ensure that they will have copies available.”

Cork University Press attributes the success of the book to its pricing and timing. Although it costs €59, Mr Collins says, it is good value given its size – the atlas has 984 roughly A4-sized pages – and scope, as it covers not only the period between 1912 and 1923 but also the events that affected Irish history before and after independence. “In my opinion it is at the outer limits of the personal purchase,” he said. “Booksellers thought it should retail for €80. Our view is that would put it out of range for many buyers.”

A report on RTÉ News in September and a “cascade of positive reviews”, including one in The Irish Times by Prof Diarmaid Ferriter, were the catalyst for the book’s initial success, according to Mr Collins.

The atlas contains 364 original maps and 707 images, many never previously seen in public. It also lists the locations of all 1,900 IRA companies in the War of Independence.

Its associate editor Dr John Borgonovo, of University College Cork, said he had been cautiously optimistic the book would be a success, although not on the scale achieved. Although it is scholarly in tone, he said, it was pitched at a general audience. “People recognise that there is a lot in it. People know what they are getting. They can see it and they can feel it.”

Atlas of the Irish Revolution has also been shortlisted for Irish-published nonfiction title of the year at the Bord Gáis Energy Irish Book Awards.