Ireland needs to practise what it preaches on climate action, says Mary Robinson 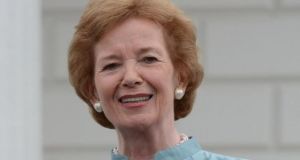 Ireland needs to approach climate diplomacy on the global stage “with a deep sense of humility”, given its past failures to address the consequences of global warming, according to former president Mary Robinson.

The climate justice campaigner said she had no doubt Ireland had displayed international leadership on matters of concern to other countries, such as promoting sustainable development goals, gender equality and world hunger, which was critical to securing a temporary seat on the UN Security Council.

“But what about our reputation on climate change? Did we not admit until recently being something of a laggard?” Mrs Robinson said. She recalled the Supreme Court had ruled the Government’s national mitigation plan was far short of what was needed to meet Ireland’s climate commitments, and ordered a new, more ambitious strategy.

“International leadership has to be earned . . . backed by a consistent domestic policy. We have to practise what we preach,” added Mrs Robinson. She was speaking at the remote Global Ireland 2020 conference with Irish ambassadors and diplomats organised by the Department of Foreign Affairs and considering Ireland’s impact on climate diplomacy.

However, she believed the programme for government tied into five-year carbon budgets was a good beginning. But this top-down approach had to be matched by a “bottom up, all-of-people approach” drawing on some of the lessons of coronavirus, notably that “collective human behaviour matters”.

Mrs Robinson said Ireland was in a position to play a leading role in the forthcoming Africa-EU summit by embracing a genuine climate justice approach.

Minister for Climate Action Eamon Ryan agreed Ireland needed to embrace climate diplomacy with humility given its past record, but it could do so with optimism and credibility, he believed.

However, he said the country was leading the world in integrating renewable electricity on its power grid and was now tackling climate issues at source.

This meant Ireland was ahead of other countries in stopping exploration of oil and gas, not importing fracked gas and ending peat extraction.

EU director general for climate action Raffaele Mauro Petriccione said Irish climate plans may have been inadequate in the past, but the current one was “a rather good plan” .

A “green recovery” after coronavirus was not a one-off, he said. It was part of a much bigger process tied into the EU’s seven-year budget which would rebuild the EU economy “not as before with all its faults, where people get comfortable after a few years, if they are lucky”.