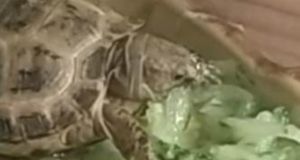 Detectives are concerned for the tortoise’s welfare as tortoises require a hot temperature of 32 degrees. Photograph: PSNI

The PSNI has appealed for help locating a pet tortoise which was taken in an aggravated burglary at a house at Strangford, Co Down.

The male occupant of a house in Elliots Place, Strangford was awoken at around midnight last night to find a male masked intruder in his property.

When he confronted the intruder, who is believed to have been armed with a knife, the intruder made off on foot.

Believed to be a man, he fled with a number of items from the house, including medals which are of sentimental value, and he snatched the occupant’s pet, a Horsfield’s tortoise.

Detectives are concerned for the tortoise’s welfare as tortoises require a hot temperature of 32 degrees. This is usually achieved by using clear spot bulbs at one end of the tortoise’s vivarium (enclosure) or over a table.

At night tortoises require a drop in temperature and darkness.

A PSNI detective said a number of items stolen were recovered a short distance away from the property. “However, the medals and the householder’s pet tortoise remain missing. The victim is understandably upset and concerned that the tortoise, which requires specialist knowledge and care, may come to harm.”

“I am appealing to anyone who may have been in the area at the time and saw anything suspicious to get in touch with us. I would also ask that anyone who comes across the tortoise, or the medals reported stolen, to call us on 101.”

Information can also be submitted online using the non-emergency reporting form via psni.police.uk or crimestoppers-uk.org.