Mail purporting to be from SDLP leader sought donations for party 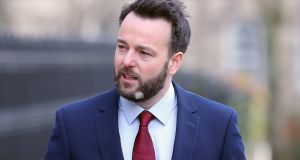 A police inquiry is underway in Derry after a fake letter purporting to be from the SDLP leader, Colum Eastwood, was sent to voters.

In it, Mr Eastwood appears to ask for financial support for his election campaign in order to make up a “£20,000 campaign shortfall”.

“The letters which have been falsely circulated in Colum Eastwood’s name amount, in our view, to a breach of electoral law,” the SDLP said. The party has said it has referred the letter to the police and to the Electoral Commission.

Mr Eastwood is the SDLP’s candidate in Derry’s constituency of Foyle in this week’s general election.

He is challenging the outgoing MP, Sinn Féin’s Elisha McCallion, who defeated the former SDLP leader, Mark Durkan, in 2017. She is defending a slim majority of 169 votes.

Mr Eastwood said he was “disgusted that fake letters purporting to be from me have been delivered to houses in Derry.

“Let me be clear, these letters are not from me nor are they from anyone associated with my campaign,” he said.

“This is an organised attempt to lie to the people of Derry, to poison our democratic process and those responsible should be ashamed.

“The people of Foyle know that this is a close race between myself and Elisha McCallion. Voters should make up their minds on our records, not a campaign of dirty tricks.”

In a statement, Ms McCallion said she condemned “any fake election material from any source”, and said she wanted “to see this election campaign conducted in an open and democratic way.”

Police Service of Northern Ireland (PSNI) district commander in Derry and Strabane Gordon McCalmont, said police received a report just after 11.30am on Tuesday “about a letter circulating in the Foyle area in relation to the up and coming election.

“Inquiries are underway, and we are liaising with our colleagues in the electoral office,” he said.

In a statement, a spokesman for the Electoral Commission said the body had been contacted by the SDLP in regard to mailing sent out in Mr Eastwood’s name in the Foyle constituency.

“We and the PSNI are looking into the complaint and whether there has been a breach of the law, including of electoral law,” the spokesman said. “Cases of fraud would be a matter for the police.”

A spokeswoman for the SDLP said the party had been notified about the letter by a voter who received it on Tuesday morning.

It is written on headed paper, and includes Mr Eastwood’s constituency address and his photograph.

The letter claims that Mr Eastwood’s campaign “has already spent in the region of £35,000 on posters, leaflets, campaign videos, social media, travelling and accommodation expenses, while my campaign Team have [SIC]only raised £15,000.”

The letter stresses that election bills must be returned by Christmas Eve, “so speedy action is required.”

The PSNI have appealed for anyone with information about the letter, or who has received one, to contact them on 101 quoting reference number 688 of 10/12/19.