Man (55) charged over theft of cash from church collection boxes 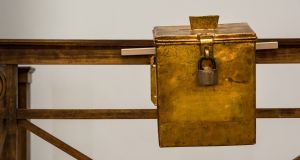 A man has been remanded on bail after he was charged with stealing cash from locked collection boxes in churches by fishing out envelopes with a wire hook. Image: iStock.

A man has been remanded on bail after he was charged with stealing cash from locked collection boxes in churches by fishing out envelopes with a wire hook.

Chilimbar Vasile (55), a Romanian national, was charged with five thefts from churches in Co Cork and Co Waterford when he was brought before Mallow District Court on Tuesday.

Mr Vasile, with an address at Eagle Valley, Sarsfield Road, Wilton, Cork, was charged with thefts from churches in Carrigtwohill, Shanagarry and Cloyne in Co Cork and from a church in Dungarvan in Co Waterford.

Mr Vasile was also charged with a fifth count of the theft of €5 from St Augustine’s Church, Abbeyside in Dungarvan, Co Waterford on January 15th, the money being the property of Fr Ned Hassett.

Det Garda David Kelleher had no objection to Mr Vasile being bailed once he adhered to a number of strict bail conditions and defence solicitor David O’Meara said his client was willing to abide by the terms sought by gardaí.

Det Garda Kelleher said gardaí wanted Mr Vasile to sign on daily at Togher Garda station and stay out of Carrigtwohill, Cloyne, Shanagarry and Dungarvan and stay out of churches in the area.

He said that the investigation was ongoing and there may be further charges brought against Mr Vasile and he applied for a six week adjournment to allow for the Director of Public Prosecution’s directions in the case.