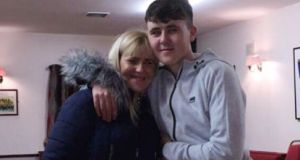 Gardaí are hoping that a postmortem will establish the exact cause of death of a 19-year-old who fell ill after ingesting a substance while attending a music festival in Co Cork at the weekend.

Jack Downey from Clonmel was with five friends at the Indiependence Festival in Mitchelstown when he took ill at about 4.30pm on Friday and was brought to the medical tent for treatment.

A doctor at the medical tent immediately became concerned at his condition and organised an ambulance to transfer Mr Downey to Cork University Hospital where he was admitted to the intensive care unit.

Mr Downey was put on a ventilator and remained in a coma over the weekend as his parents, John, a garda based in Clonmel, and Elaine, who works in a local jeweller’s shop, maintained a vigil at this bedside

But on Monday afternoon, Mr Downey, an only child, was taken off the ventilator and he died at about 4pm as confirmed by gardaí later in a statement from the Garda press office.

Gardaí under Supt John Deasy of Fermoy have begun an investigation into the circumstances of Mr Downey’s death and have requested the services of the State Pathologist’s office to carry out a postmortem on the dead youth.

Assistant State Pathologist Dr Margaret Bolster is due to commence a postmortem at 10.30am on Tuesday which gardaí expect will confirm that Mr Downey died as result of ingesting ecstasy, also known as MDMA.

Gardaí have spoken to Mr Downey’s friends and are satisfied from their inquiries that Mr Downey believed he was taking ecstasy when he ingested a substance at the festival and while others also took the substance, they did not become ill.

Gardaí say they are making good progress in their investigation into how Mr Downey obtained the drug and their inquiries are leading them to focus on Mr Downey’s home town of Clonmel where they are liaising with local gardaí.

Mr Downey was very involved in GAA and played with local club, Clonmel Óg, which yesterday expressed its sympathies to his parents and urged club members to rally around and help support the family through the loss.

“Our worst fears were realised this afternoon with the news that Jack Downey passed away in the company of his parents,” said Clonmel Óg in a post on its Facebook page.

“We are devastated and will have more to say in time. The Mass this evening goes ahead and all are welcome. At a time like this we need to be strong and there for each other.”

Local curate Fr Michael Toomey of St Peter’s and Paul’s church echoed the sentiments in a tweet after news broke of the tragedy. “We all have a tough few days ahead of us in Clonmel. Let’s look out for one another,” tweeted Fr Toomey.

A former pupil of CBS High School in Clonmel, Mr Downey had completed first year at Cork Institute of Technology where he was studying accountancy, and CIT last night extended its sympathies to his family on their loss.

Dr Dan Collins, head of student affairs at CIT, indicated there was a sense of utter shock and loss on hearing that Mr Downey had passed away and said the thoughts and prayers of those at CIT were with his family.

“I would like to extend, on behalf of the president and the entire CIT community, our sincerest sympathy to Jack’s parents, family, friends and all who were privileged to know him,” said Dr Collins.

Dr Collins indicated that Mr Downey was a very popular student who had endeared himself to his fellow students, faculty, staff and the wider CIT community.

“He was a young man, full of enthusiasm, who lived life to the full and loved his family, friends and his sport .He was outgoing, friendly and had everything to live for. He will be missed by so many who were privileged to know him.”

Meanwhile, the organisers of Indiependence Festival also expressed their condolences in a statement last night in which they also confirmed some details regarding what happened when Mr Downey became ill.

“Our immediate thoughts and those of all the festival-goers are with the family, relatives and friends of the deceased at their very sad loss,” said Indiependence Festival.

“On Friday a 19-year-old adult attending Indiependence Festival became ill. The on-site medical team of doctors and paramedics immediately treated the individual who was transferred to hospital by one of the on-site ambulances.

“Despite the best efforts of all medical teams, the individual passed away today, in hospital. As with all sudden deaths, An Garda Síochána are investigating any pre-existing medical conditions and the circumstances surrounding the matter.”