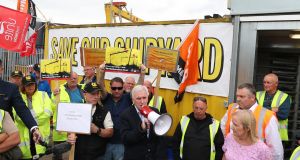 Employees of Harland and Wolff with Labour shadow chancellor, John McDonnell at the gates of the Belfast shipyard. Photograph: Liam McBurney/PA

A major part of the industrial fabric of Belfast appeared on the verge of coming to an end after the Harland and Wolff shipyard went into administration on Monday.

The DUP leader Arlene Foster, together with the party’s MP for East Belfast Gavin Robinson, met Harland and Wolff workers on Monday at Stormont. Afterwards Mr Robinson said, “We share the disappointment that they have that there has not been a resolution and rescue package that we had advocated for and that we had hoped for”.

The new Northern Secretary Julian Smith said he has been “speaking to partners across Whitehall and in Northern Ireland, including the Department for the Economy and Invest NI, on the next steps to help those affected”. He added that he “has made it clear that he will continue to do everything he can to secure the future of this historic site and ensure workers’ interests are protected during this difficult time”.

Joe Passmore, a Harland and Wolff shop steward and steel worker, said the occupation of the site, which has been running since Monday of last week would continue. There was applause at the site when one union official said if the DUP did not persuade the British government to save the yard that workers’ representatives would stand against DUP candidates in future elections.

The British Labour shadow chancellor of the exchequer John McDonnell, who met workers at the site on Monday, said Mr Johnson had failed them in his first real test as prime minister.

“We know this is a viable concern, we know the government has naval contracts it can put here to ensure the long-term future,” he added. “We know there are contracts out there but it just needs support from the government. I am saying to Boris Johnson very specifically he can’t stand on the sidelines.”

Mr McDonnell said Labour would have nationalised the yard.