Most in UK want to decriminalise abortion in N Ireland, polls show 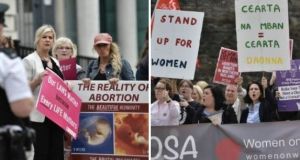 Both sides: Women protest against abortion (left) and in favour of choice (right) in Belfast. File photographs: Getty Images

New opinion polls have found that the majority of people across the United Kingdom want to see abortion decriminalised in Northern Ireland.

Unlike in the rest of the UK, abortions in Northern Ireland are illegal in all but exceptional medical and mental health circumstances.

The opinion polls commissioned by Amnesty International include findings that 65 per cent of adults in Northern Ireland agree that abortion should not be a crime, and 78 per cent of British people are in favour of decriminalisation.

It also found that more than two-thirds of people in Northern Ireland and three-quarters of people in Britain think the government should act to change the law.

Amnesty said these are the first major surveys of public opinion on abortion reform in Northern Ireland since the Republic of Ireland voted to repeal the Eighth Amendment in a referendum on abortion in May.

The UK government has resisted calls to step in to legislate for reform following a British supreme court judgment in June that found the current legal framework incompatible with human rights laws.

However, the court dismissed the legal challenge by the Northern Ireland Human Rights Commission by a narrow majority and said it had no jurisdiction to consider the case because there was no actual or potential victim of an unlawful act involved in it.

In February 2016, members of the Northern Ireland Assembly voted against legalising abortion in cases of fatal foetal abnormality by 59 votes to 40, with DUP MLAs among MLAs voting against.

The poll carried out in Northern Ireland found that 67 per cent of DUP voters questioned agreed that having an abortion should not be a crime and 65 per cent think Westminster should reform the law in the absence of a devolved government.

In Britain, 74 per cent of Conservative voters think the government should act to change the law, as do 78 per cent of Labour voters.

The UK government cannot ignore the overwhelming support for abortion law reform. It must listen to the people and put an end to the criminalisation of women and girls

“Every part of the UK agrees that abortion should be decriminalised and that Westminster should legislate for change,” she said.

“This confirms what we’ve long known, that most people in Northern Ireland and across the UK agree that it’s completely wrong for Northern Irish women to be governed by an archaic law that denies them their rights, health and autonomy.

“The results show that this is not a political or contentious issue, it’s fundamentally an issue of health, human rights, equality and dignity.

“Voters of all political backgrounds, including Labour, Conservative, Sinn Féin and DUP voters, are backing decriminalisation of abortion.

“The UK government cannot ignore the overwhelming support for abortion law reform. It must listen to the people and put an end to the criminalisation of women and girls.”

It aims to remove sections of the 1861 Offences Against the Person Act that make abortion a criminal offence in England, Wales and Northern Ireland. The 1967 Abortion Act in England and Wales provided for exemptions to the 1861 Act, enabling legal abortions.

It will be introduced in the House of Commons on October 23rd. – PA