Major fire breaks out at building in Limerick city 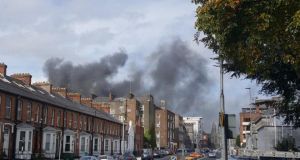 A major fire is raging at a building in Limerick city.

The building is believed to be a derelict premises formerly owned by the Limerick Leader newspaper, a number of sources at the newspaper said.

The building is located a few yards from the offices of the local newspaper, but the two buildings are not joined.

“They are separated by an alleyway,” said another reliable source.

Black smoke covers the skies with at the rear of the old Desmond Arms or Temple of Sound. Mallow & Cecil Street closes to traffic. @LimerickFire at the scene. Quick response. pic.twitter.com/lhHSxKqulO

At least twenty emergency calls were received by Munster Fire Control about a fire in the vicinity of Upper Glentworth Street.

“It is a substantial fire,” a source said.

A large plume of black smoke from the fire has spread across the city centre.

Mayor of Limerick’s Metropolitan District, Daniel Butler, who posted a picture online, tweeted: “Black smoke covers the skies with at the rear of the old Desmond Arms or Temple of Sound. Mallow & Cecil Street closes to traffic. @LimerickFire at the scene. Quick response.”