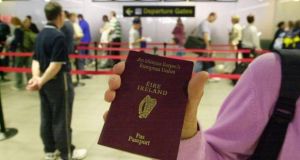 Fine Gael Senator Neale Richmond said: “Such a spike is clearly tied to the Brexit referendum and the uncertainty that has prevailed since the vote.” Photograph: Alan Betson

The number of British nationals becoming naturalised Irish citizens has surged since the UK voted to leave the European Union in 2016, new figures show.

Department of Justice statistics show that the number of UK nationals swapping British for Irish citizenship increased five-fold after the Brexit referendum, rising from 98 in 2016 to 529 in 2017.

The 2016 figure was almost double the previous year’s figure of 54.

The information was released by the department to Fine Gael Senator Neale Richmond, the chairman of the Seanad’s special committee on Brexit and his party’s EU affairs spokesman in the Seanad.

“Such a spike is clearly tied to the Brexit referendum and the uncertainty that has prevailed since the vote,” Mr Richmond said.

There are more than 300,000 British nationals living in the State, he said, and estimated that about a third of these would not qualify for an Irish passport through lineage.

The Fine Gael senator said many who had applied for Irish citizenship had done so because they were “very worried that they would find themselves high and dry” after the UK leaves the EU next March.

“I do get quite a lot of representations, an awful lot of my constituents who are English or Scottish and working in good jobs who are not going back to the UK at this stage,” he said.

“They hope there is going to be a deal [on Brexit] and citizens’ rights are being looked after if we get a deal, but people aren’t willing to take a chance.”

The Department of Foreign Affairs said earlier this year that Brexit was “undoubtedly” the reason behind a 25 per cent rise in applications for Irish passports in the first four months of this year compared with the same period in 2016.