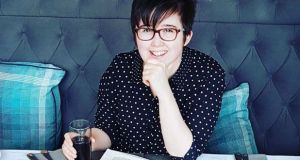 The family and partner of Lyra McKee as they prepare for her funeral service in Belfast this Wednesday afternoon have thanked the public for the “outpouring of support and love” they received since she was killed by the New IRA in Derry last Thursday.

Ahead of the ecumenical funeral service in St Anne’s Church of Ireland cathedral at 1pm on Wednesday, Ms McKee’s family and her partner Sara Canning described their loss and anguish after their “beautiful Lyra was taken from us”.

Ms Canning and Ms McKee’s mother Joan and three sisters and two brothers described the message that the 29-year-old journalist, author and gay rights activist would have had for the New IRA.

“We as a family know that the whole community has been touched by the events of Thursday night and that many are rightly angry,” they said in a statement.

“Lyra’s answer would have been simple, the only way to overcome hatred and intolerance is with love, understanding and kindness,” they said.

They asked “that Lyra’s life and her personal philosophy are used as an example to us all as we face this tragedy together”.

They described Ms McKee as a “daughter, a sister, an aunt, a great-aunt, a partner, a niece, a cousin, and above all, a best friend and confidante to so many of us”.

As they prepared for her funeral they said she was a “friend to all, a gentle innocent soul who wouldn’t wish ill on anyone”.

“Such a warm and innocent heart, she was the greatest listener, someone who had time for everyone. She was a smart, strong-minded woman who believed passionately in inclusivity, justice and truth,” said the family.

“Lyra spoke to and made friends with anybody and everybody, no matter what their background, those of all political views and those with none. This openness, and her desire to bring people together, made her totally apolitical,” they added.

“We would like to thank everyone for the outpouring of support and love we have witnessed this past few days. It has been of immense solace that Lyra meant so much to so many. We ask everyone who knew Lyra to continue her message of positivity and hope, by respecting her memory with dignity and respect.”

They said they were a private family and asked that their privacy be respected “at this impossibly difficult time”.

“We will, in time, speak to you all, but need space and time in the coming days and weeks to deal with the trauma of Lyra’s sudden tragic death,” they said.

Several hundred people are expected to attend the funeral service this afternoon. Those who are unable to get inside the cathedral will be able to hear the service broadcast from outside the building.

The chief mourners are Ms McKee’s mother Joan, her partner Ms Canning, her sisters Joan, Nichola and Mary, brothers Gary and David, nieces and nephews and a great-niece Ava.

Also attending will be President Michael D Higgins, the Taoiseach Leo Varadkar, the Tánaiste and Minister for Foreign Affairs Simon Coveney and the Minister for Children and Youth Affairs Katherine Zappone. The Northern Secretary Ms Bradley also is expected to attend the service along with numerous political, community and church leaders, and friends of Ms McKee.

The Dean of St Anne’s, the Very Reverend Stephen Forde will officiate at the service while the parish priest of St John’s in west Belfast, Fr Martin Magill will deliver the homily.

Ms McKee’s family had requested that the funeral service be held in St Anne’s Cathedral because it was a “shared space” that was reflective of her views and personal philosophy.

The family also requested that Fr Magill be involved in the service as he was their priest when he served in the Sacred Heart parish in north Belfast where the McKees live.

Members of the National Union of Journalists, of which Ms McKee was a member, will form a guard of honour at the funeral.

In the House of Commons on Tuesday evening the Northern Secretary Ms Bradley said the murder of Ms Bradley was “truly shocking and heartbreaking” for her family and friends.

“Lyra was a brilliant, talented journalist, and a true loss to Northern Ireland. She was a role model to many who always fought to make Northern Ireland a better place. Nothing we can say today can take away the pain that Lyra’s family must be experiencing now,” Ms Bradley told MPs.

“We are behind you and we are united in rejecting those who seek to undermine peace with terror. They have no place in our society. They must be dealt with under the law. The people responsible for Thursday’s sickening attack will never win,” said Ms Bradley.

She said that people were “struck by the profound sense of anger at this sickening and callous attack”.

“This was a young woman with so much hope and so much to offer unlike those who have continually shown that they have nothing to offer. It remains the case across Northern Ireland that small numbers of dissident republican terrorists remain intent on killing,” said Ms Bradley.

But what we have seen in the days since Lyra McKee’s death is that the communities that they claim to represent and seek to control don’t want them. They want peace, progress and prosperity and want no part of the sort of mindset that leads to the death of a young woman, simply doing her job,” she added.

Said Ms Bradley, “To those responsible for this act of terrorism we say we have heard your excuses and your hollow apologies. No-one buys it. This was no accident. There is nothing that can justify this murderous act and you are being called out for what you really are.

“Church and community leaders have united their voices in condemnation, as have those across the political spectrum. Those voices of peace are strong and united and louder than those who peddle hate and division in a city with so much to offer.”

Meanwhile, Minister for Foreign Affairs Mr Coveney held a number of meetings on Tuesday with Northern political leaders to test whether it would be worthwhile calling fresh talks aimed at reinstating the Stormont powersharing institutions. He is to meet Ms Bradley later on Wednesday.

Ms Bradley also told MPs that planned to hold discussions with Northern party leaders later this week to see what progress can be made.

At the weekend the SDLP leader Colum Eastwood wrote to the Taoiseach, the British prime minister Theresa May and the leaders of the North’s other main parties saying there was “an unmistakable public desire that the tragic and terrible loss of Lyra McKee marks a turning point for our peace and political process”.

While there is a certain scepticism about the value of immediate talks with local elections next week and European elections towards the end of May Mr Eastwood said this was a moment that politicians should seize to try to break the political logjam.