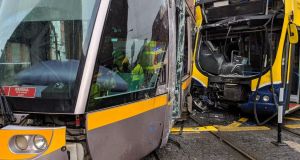 The scene of the crash on Saturday morning. Photograph: Dublin Fire Brigade Twitter

Nine people were hospitalised after a crash between a double-decker Dublin Bus and a Luas tram in central Dublin.

The collision - the third involving a Luas in recent weeks - happened at 7:07 am at the junction of Queen Street and Benburb Street in the Smithfield area of the north inner city.

Services have returned to normal after several hours of disruption on the Red Line which saw no trams running between Heuston and The Point for much of Saturday.

The driver of the Luas, three ticket inspectors, four Luas passengers and the Dublin Bus driver are understood to have been among the hurt.

Luas operator Transdev said its staff were taken to hospital for “precautionary reasons” while Dublin Bus would not comment on the condition of its driver.

There were no passengers on the double-decker at the time, as the driver was traveling to start a shift.

The tram was travelling in the direction of the city centre when it was derailed as a result of the crash.

Firefighters/Paramedics from Phibsborough and HQ responded to collision between a LUAS tram and a bus this morning on Queen Street. 9 people treated and transported to hospital by DFB and NAS ambulances. No life-threatening injuries. Expect delays in the area. pic.twitter.com/ISJLxFlSxp

Several Dublin Fire Brigade ambulances were called to the scene, and paramedics said there are “no life threatening injuries” among the nine taken to hospital.

Ciarán Cuffe, Green Party transport spokesman and councillor for the area who lives close by, was on the scene shortly after the crash.

“It could have been so much worse,” he said.

“Obviously, I’m pleased that it appears no-one has died, but of there had been a Luas travelling in the opposite direction at the time, or if there had been passengers on the Dublin Bus, things could have been so much more serious.

“We are just very lucky this time.”

Mr Cuffe said the there had been a number of incidents on the Luas red line because “there is a lot more street running” on the route.

Dublin City Council has to work with the Luas team and Dublin Bus to “tease out what can be done to minimise incidents like this happening again”, he said.

“By the time I got there the injured had been removed to hospital, and a security guard told me his ticket inspector colleagues were okay, but there appears to be significant damage to both the bus and Luas.”

Four investigations have been launched: by the Garda; Rail Accident Investigative Unit; Transdev; and Dublin Bus.

None of the investigators would disclose any early indications into the cause of the collision, which has resulted in significant damage to both the tram and the bus.

It is believed the tram will take some time to repair, which could cause knock-on disruption for rush-hour commuters in Dublin after the bank holiday weekend and into next week.

On Monday, a 30-year-old man was killed after being struck by a Luas tram at the Kingswood area in the south-west of the city shortly before midnight. It was believed he may have been either lying on or crouched down on the tracks at the time.

Last month another pedestrian was killed following a collision with a Luas. Patricia Quinn, a mother of five in her early 70s from Tallaght, was killed in the collision in mid-February.