One year on, tram’s extension to Cabra has led to concerns over parking and gentrification 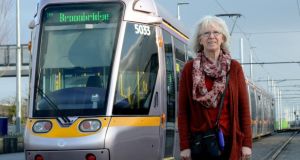 Laura Grehan wishes her parents were still alive to see the Luas trams running through Cabra. They would have remembered the original street tracks that crisscrossed the city, she says.

At 59, Grehan is too young to have encountered Dublin’s first tramway system but she has spent her whole life in lower Cabra, a short walk from where Luas Cross City has been transforming the suburb over the last 12 months.

After years of planning and expectation, its arrival has led to local consensus on its value as a transport link as well as concerns over demand-led parking problems and talk of “gentrification” and its associated rise in property values.

Exactly how Luas Cross City has and will affect the new areas it serves is an ongoing question. Those who live along the five stops that splice Cabra and Phibsboro with the north city are still adjusting to the trams that signal an era of change – the overwhelming majority of reaction is positive.

“To me Cabra will always be Cabra,” Grehan says. “I am probably a bit biased because I have been here all my life but [the Luas] has definitely given us that little bit extra, most definitely.”

She raised three children in the neighbourhood. Her parents first met each other in the Dublin inner-city tenements, moving to the suburb when they married. The family has been a Cabra fixture, three generations witness to its changing shape.

Grehan is undecided as to how much the Luas will change the area. “It’s a bit of a hard one because it used to be kind of that a family home was maybe passed down when a parent passed away. Children might decide to come back to the area. I don’t know if that’s happening any more,” she says. “They are growing up and moving to newer pastures. The only thing that I would be kind of more concerned with is that it will just become more of a whole rental area.

“If that happened, would the sense of community start decreasing? I am not saying it would, but it’s a question.”

Green Party councillor Ciarán Cuffe said he sees the cross-city line complementing a long-standing period of transformation in the areas skirting the city.

While children might be priced out of the areas in which they grew up, he said, the flip side is that other areas have been simultaneously developed and now more people are living in them. “There are a lot more people living here and a lot of sites that were empty in the 1970s and 1980s have been built on,” he said.

Cuffe also believes the trams could help change the fabric of the areas – cycling down Dominic Street recently, he noticed that “having a traffic-free route where you can hear people talking is a positive one”.

However, while the Luas has been seen to improve life in these areas, those who predicted parking problems due to an oversubscription to the network have found themselves proven right.

Former Labour TD Joe Costello, who plans to run in the next election, says he has noticed a rise in the number of complaints on the issue in the last couple of months. Many Luas users come from further afield and park on quiet roads where there are no charges.

Although it has found its way into some parts of Cabra, many residents are reluctant to capitulate to the idea of pay-and-display parking charges to deter drivers abandoning their cars near Luas stops.

“People in Cabra were free to park in their streets but now they are finding that people are coming in the morning and leaving in the evening,” says Costello, naming Faussagh Road and St Attracta’s Road as particular problem areas.

He said there is tension that Dublin City Council has not provided parking options near the stations and that it should work with residents on the possibility of introducing paid parking locally, with relatively low annual charges for residents.

“There is a process but the way I would like to see it being dealt with is for the local authority to take the initiative.”

Dublin City Council said there were no provisions made for park-and-ride facilities as part of Luas Cross City project. It said the preparation of a pay-and-display and residents’ permit parking schemes were made only where they received written support from a quarter of residents in the relevant area.

Local councillor Cieran Perry said the level of initial complaints on the issue had subsided and that much of the problem, including illegal parking, had been dealt with.

“In Bannow Road, Broombridge and to a lesser extent Carnlough, the clampers came out and clamped everything in sight,” he said.

Undeterred, many have shifted to the nearby Dublin Industrial Estate, a new base for those determined to benefit from the Cross City.