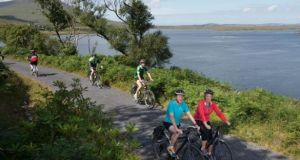 Over 40 outdoor recreational projects such as cycleways and walking trails are to benefit from €8.4 million in State funding announced on Friday. Photograph: Michael McLaughlin

Over 40 outdoor recreational projects such as cycleways and walking trails are to benefit from €8.4 million in State funding announced on Friday.

The Department of Rural and Community Development announced nine large scale projects to receive up to €500,000 and 35 smaller projects granted funding of up to €200,000.

Five of the nine large projects received the full €500,000 grant, these included works to repair access to Mount Errigal, Co Donegal, and improvements to the Great Western Greenway trail in Mulranny, Co Mayo.

Other projects awarded the full grant included the first phase of the Boyne Valley to Lakeland Greenway, which will stretch from Navan to Wilkinstown, improvements to an existing canoe trail on the River Suir, Co Tipperary, and a recreational hub and 3km extension to the Mullingar Greenway, Co Westmeath.

The scheme funds the development and maintenance of outdoor recreational projects. The department provides €4.4 million in funding for the scheme, with Fáilte Ireland providing a further €4 million.

The funding is to improve outdoor tourist facilities for activities such as hiking, cycling and walking.