Lorenzo the Magnificent lures RDS crowd away from main event 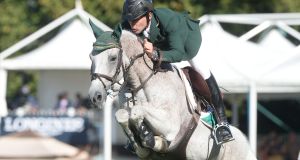 Mark McAuley on Miebello picked up 12 faults during his final round. The Aga Khan Trophy was won by the all-female American team. Photograph: Alan Betson 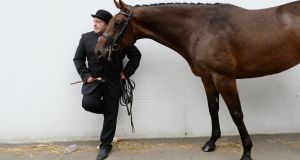 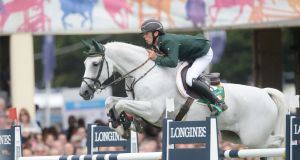 Bertram Allen on Molly Malone during their final round. Photograph: Alan Betson

It takes something special to draw a crowd away from the biggest event of the RDS Horse Show – the FEI Nations Cup for the Aga Khan Trophy.

Lorenzo “The Flying Frenchman” provided such a dazzling, incredible spectacle that even seasoned horse trainers were mesmerised.

As the event in the main arena was going on, Lorenzo drew gasps of astonishment from the crowd in the Simmonscourt arena.

There is something elemental about a rider who walks surefooted from one travelling horse to another or stands with a foot in each stirrup while holding the French and Irish tricolours in each hand.

With the nod of his head, he is pursued by 12 beautiful Camargue horses, six black and six white, a breed peculiar to the south of France.

They dance around him in a beautiful symphony of equine perfection and after a routine in which they all bow in unison, the magnificent Lorenzo exits the arena with cheers ringing in his ears.

“Since we were four years of age we have been riding horses and hunting cross-country, but I’ve not seen anything like this” she said. “It’s amazing. He’s a gifted man.”

The Aga Khan Trophy was won in an impressive display of girl power by the all-female American team who finished with no faults.

The Irish team were in contention and were joint leaders after the first round, but then Bertram Allen on Molly Malone downed a pole in the second round and a low groan spread across the arena.

It was all over for Ireland when Denis Lynch on RMF Echo recorded 13 faults. Many in the sun-splashed arena began to head for the exits after that round.

Paul Carberry too had a day that it would be easier to forget. He finished 42nd in the early morning class for seven to eight year olds on Brandonview First Edition.

The former national hunt jockey (43) quit racing after a fall that broke his leg and he hoped for a kinder introduction to the less frenetic world of showjumping. It was not to be. How many faults did he have? “I lost count,” he responded. (It was 20).

“I thought I was getting the hang of it,” he said, “it was very technical for me, short strides and long strides. It caught the two of us out a bit, but I’m going to keep going on and keep trying it.”

On Sunday it will be the turn of the donkeys. Last year, in deference to the donkey’s place in Irish history, the Easter Rising was remembered. This year the role of donkeys and mules in the first World War will be recalled. Many Irish farmers grew rich during the war supplying horses, donkeys and mules to the British army.

Hundreds of thousands of donkeys and mules served at the front. When the war was over, they were all shot because they could not be transported back to Britain.

Jack Wyse, father of television presenter Rachel, said the donkey is as much a symbol of the traditional image of the Ireland as the harp and the leprechaun, but numbers are declining rapidly.

“The way things are going, in 50 years’ time you will only see donkeys in zoos,” he said.