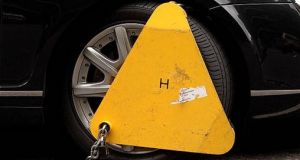 Attempts to regulate the private clamping industry – elements of which demand up to €300 to release a vehicle – were frustrated by an error in drafting the 2015 Clamping Act, it has emerged.

According to the annual report of the Department of Transport published on Friday, “a technical error was identified” in the Clamping Act 2015 , the year after it was passed by the Dáil and Seanad.

The error came after almost a decade of public controversy over the activities of private clampers, some of whom were described as “rogue” by Taoiseach Leo Varadkar when he was minister for transport.

The current Minister for Transport, Shane Ross, said the regulations are due to come into effect in October this year.

This comes 10 years after concerns were voiced about the behaviour of some clampers. Nine years ago the Consumers Association of Ireland said people were being clamped while attending church services in Rathfarnham, Dublin.

In 2009, the AA presented the Government with detailed proposals to regulate the clampers, and the following year then opposition TD Simon Coveney tabled a Private Member’s Bill in the Dáil aimed at regulating the industry.

The following year a commitment to regulate the clamping industry was contained in the Fine Gael-Labour programme for government, but it was not achieved .

In 2014 Mr Varadkar as minister for transport posed outside Government Buildings with a clamp to announce the end of what he described as “rogue clampers”.

At that point the Department of Transport said it would transfer powers to introduce the vehicle clamping regulations to the National Transport Authority.

In August 2015, the National Transport Authority said work on the regulation of off-street clampers, including “rogue clampers”, was “is in the early stages”.

In 2016 the authority said drafting the regulatory regime was complex, and raised issues relating to a possible scale of charges covering different areas or types of private property.

In May 2017, Mr Ross said he was “delighted” to be able to commence sections of the Vehicle Clamping Act 2015, which would allow the authority to hold public consultation, and “assume all its new responsibilities effective from October 1st”, he said. The announcement made no reference to an error in the drafting of the 2015 Act.

On Friday a spokesman for the authority said “arising from that process, a report will be submitted to the NTA board in September, with a view to adopting clamping regulations”.

He added that the authority was “on schedule to become the clamping regulator on October 1st”.