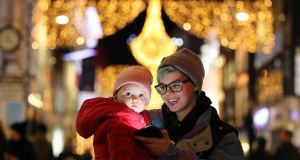 Mia Greally (1) with motherJodi Carroll-Greally enjoying the turning on of Christmas lights in Dublin on Tuesday night. Photograph Nick Bradshaw / The Irish Times

Taoiseach Micheál Martin has said the Government will make a decision on exiting lockdown next week, and that there will be a Dáil debate on the issue beforehand to hear different views on strategy.

He told Wednesday evening’s meeting of the Fianna Fáil parliamentary party that he wanted Christmas to be “meaningful, enjoyable and safe” and that it would be about “trusting the public with their personal behaviour”.

He also argued that the Republic was doing well on controlling the disease in comparison to most European countries.

The party’s meeting also heard recriminations over the Fianna Fáil general election campaign with some members critical of the party’s “air war” and how its Dublin headquarters ran election strategy.

A review of the election is underway, steered by Minister of State Seán Fleming, who gave a update at the parliamentary party meeting, as well as Minister of State Mary Butler and Dun-Laoghaire Rathdown TD Cormac Devlin.

Barry Cowen, the former minister for agriculture, told the meeting that the review should look at the campaign run by headquarters, and examine what went wrong. Fianna Fáil was generally seen to have underperformed expectations in the general election.

James Lawless, the Kildare North TD, told the meeting that the ground war had been fought well at constituency level, but that candidates had been “let down” by the air war from headquarters.

Anne Rabitte, the Minister of State in the Department of Health, suggested that the review should examine whether Fianna Fáil members did enough for candidates on the ground.

The meeting also heard calls for Minister for Justice Helen McEntee to come before the Dáil to answer questions on the appointment of Séamus Woulfe to the Supreme Court.

Marc MacSharry, the Sligo-Leitrim TD, said the Taoiseach had done the right thing in deciding not to seek an impeachment. However, he told his party colleagues that Ms McEntee should answer questions to ensure the process is clear, and that the party shouldn’t block Opposition attempts to seek time for that to take place.

The meeting heard a variety of contributions on pubs, with Mr Cowen calling for clarity on the situation. Sources said the general view at the meeting was also that there should be no differentiation between wet pubs and dry pubs.

Senator Lisa Chambers said that pubs were coming under pressure to order kegs from Diageo in time for Christmas if they were to open, but expressed the belief they would not be able to do so, and that the public may not want to go to a pub even if they were open.

Ms Chambers also said the party should support Labour’s bill on citizenship, which would ensure that children born in the State get citizenship here.

Clare TD Cathal Crowe also said that pubs needed clarity on the issue of Christmas opening, and said the impact on families working in the hospitality sector should be considered.

Mr MacSharry said he hoped that hospitality would be allowed open for Christmas. He spoke about Donegal, where infection rates are stubbornly high, arguing that given its size, if the Government is going to have a different approach to Donegal it should acknowledge that the problem is localised to certain Broder areas mainly in east or north east. He warned Government shouldn’t penalise the south or west of the county, where infection is lower.

Mr MacSharry also criticised the handling of the proposed ban on takeaway pints, which was diluted earlier in the week to a ban on gathering outside to drink alcohol, before being withdrawn at Cabinet. He said its introduction was a knee-jerk reaction and that the Cabinet memo was “ill thought out”, arguing that the parliamentary party should have been used as a sounding board before anything else took place.

Mr MacSharry also raised the issue of CervicalCheck, arguing that compassion for the women impacted needed to trump financial considerations on this occasion, and said that the women who found themselves outside the statute of limitations on the matter should be admitted to the tribunal.

Minister for Health Stephen Donnelly gave an update on his work on the CervicalCheck issue, saying that there are three substantive issues left which his Department are currently working through, and assured colleagues that “no woman will be left outside the door”. He assured colleagues that he will continue to work closely with the 221 Plus advocacy group to deal with outstanding aspects.

The meeting also heard a contribution about concerns about pylons along the border from Cavan-Monaghan deputy Niamh Smyth, and updates from two policy groups, one on sports, arts, culture and media, and another on Brexit preparedness.

Elsewhere, former Minister for Health Simon Harris called for greater use of the Army in contact tracing amid concerns about frontline healthcare staff being taken away from providing vital services for children.

At a private meeting of the Fine Gael parliamentary party meeting, the Minister for Higher Education said it was vital that as many additional people as possible were hired to work on contact tracing and that he understood there was work underway on this.

A source said that Mr Harris said the country got a lot of support from the army and he questioned whether the Government could seek further assistance.

He also said the Government needs to provide clarity next week on the country’s plan for leaving Level 5.

Up to 80 cadets from the Defence Forces were assisting contact tracing efforts last month, according to the HSE, along with environmental health officers and other public servants.

Dublin Mid West TD Emer Higgins told the meeting that speech and language therapists were being redeployed for Covid 19 tracing and she outlined the impact this had on families who need those resources. She also raised the need for public health nurses to resume conducting developmental checks when Level 5 ends, rather than Covid 19 contact tracing.

Fine Gael TDs also called on the Cabinet to begin consulting with churches on the plan for Christmas.

Former minister for justice Charlie Flanagan said advance planning was essential and should include “celebrating the festival of Christmas through Christian worship”.

He said that the State must work with churches, which are the biggest buildings in most neighbourhoods, to facilitate Christmas services.

He was supported by similar contributions from Carlow Kilkenny TD JP Phelan.

The meeting also heard calls for a full Dáil debate on exiting the lockdown. The Cabinet is due to meet next Tuesday and potentially again at the end of the week to decide on the plan for moving out of Level 5.