Seven prison officers to guard each paramilitary prisoner in Portlaoise 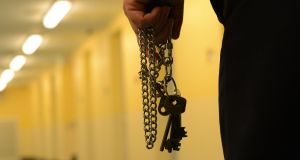 A call has been made for talks to reduce the “huge cost” of guarding 28 paramilitary prisoners currently incarcerated.

A call has been made for talks to reduce the “huge cost” of guarding 28 paramilitary prisoners currently incarcerated.

High security Portlaoise prison is the designated prison for those convicted of and on remand for paramilitary offences.

And the Dáil heard that the equivalent of seven prison officers are in place to guard each paramilitary prisoner.

Sinn Féin TD Pa Daly said there was a small number paramilitary prisoners – “I think only about 28 in Portlaoise prison, at a huge cost”.

He suggested that “maybe some talks could take place because I think there’s a couple of hundred prison officers in total have to guard those prisoners”.

He believed that talks could take place “in order to reduce the cost to the State of having to guard them”.

The Kerry TD also called for a “proper system of accountability within the prison system”.

He said the remit of the Ombudsman was supposed to have been extended to include prisons. “It hasn’t happened yet. It should be examined and a prisoners’ inspectorate (established) independent of the Minister (for Justice).

Mr Daly, a solicitor, noted there had been a 60 per cent increase in video links for court appearances, during the Covid-19 pandemic.

He said that “just in the same way Garda vehicles have been expanded maybe prison vehicles can be also”.

The Sinn Féin TD was speaking during a Dáil debate on community safety and crime prevention following the announcement last week by Minister for Justice Helen McEntee, of a pilot project in Dublin’s north inner city, Waterford and Longford for local community safety partnership which will replace the local joint policing committees.

The pilot project will run for 24 months and the three areas were chosen based on a number of factors including population density, crime rates and deprivation.

Opening the debate the Minister said the partnerships will replace the local joint policing committees, and “will include residents, community representatives (including youth, new communities and the voluntary sector), business interests, councillors, local authorities and State services such as An Garda Síochána, Tusla and the HSE”.

The Minister said that “crucial day-to-day policing has continued throughout the pandemic, with a particular emphasis on those vulnerable groups most at risk.

“While there has been a general and welcome decrease in many categories of crime during the Covid period, some categories have increased such as domestic abuse, drugs offences and cybercrime,” she said.

Ms McEntee said sustained action by An Garda Síochána “has continued unabated throughout the pandemic, bringing ‘significant’ convictions and ongoing seizures of drugs, firearms and ammunition”.