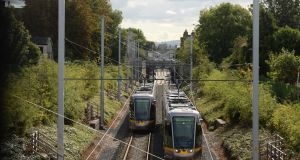 Crowded conditions on the Luas green line may ease in the near future as transport authorities extend existing 40m trams on Dublin’s green line to 55m lengths.

The changeover is possible because of the modular design of Luas and the move follows the successful introduction of seven, 55m trams on the cross-city line in February 2018.

On Monday, transport authorities led by Minister for Transport Shane Ross unveiled a special “wrapped” edition Luas, with the additional 15m wrapped to illustrate the extra length. The tram was wrapped in a purple ribbon with the image of a large scissors.

The unveiling was attended by director of the National Transport Authority Anne Graham along with and Michael Nolan of Transport Infrastructure Ireland as well as Mr Ross, at a “closed” photocall. A spokesman said photographs of the event would be issued later on Monday.

It is proposed to extend a total of 26 trams to 55m in length over the coming 14 months, initially on the Green line where congestion is very severe, particularly in the morning peak.

Luas catered for a record 41 million passenger-journey in 2018, an 11 per cent increase over the previous year and passenger numbers are expected to jump by a similar amount in 2019.

The 55-metre Luas tram, built by Alstom in France, is the second longest tram in the world, just one metre behind the 56-metre Spanish built CAF tram in operation in Budapest in Hungary.