Clampers told not to engage in ‘predatory’ behaviour towards motorists 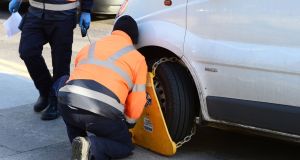 Some 130 motorists are clamped every day in Dublin. Photograph: Alan Betson/The Irish Times

Vehicle clampers have been advised to not engage in “predatory” behaviour or attach devices to vehicles that people are sitting in.

A draft code of practice for clampers also suggests that in near-miss scenarios - where an owner returns to their vehicle just as it is about to be clamped – the vehicle should be released if the device has not been locked.

In cases where vehicles are about to be towed away, the code of practice says these vehicles should be released if the driver comes back before two wheels have left the ground.

The draft document, published by the National Transport Authority (NTA) on Monday, aims to supplement legislation governing clamping and will now go out to public consultation.

About 130 motorists a day are clamped in Dublin city, most commonly for not having sufficient paid parking, and are expected to pay a fine to secure the release of the vehicle. The practice impacts on thousands of people every year and clampers have reported encountering hostile owners.

The new code is an attempt to clarify the rules of operation and to ensure everyone understands the system.

“Tactics that appear overenthusiastic or aggressive to motorists or other members of the public should be avoided. In particular, activities which could be construed as predatory may not be carried out.”

In situations where the member of the public becomes aggressive, clampers are advised to reduce tension or simply leave and report the situation to gardaí. The forced removal of a clamp is an offence.

The code includes procedural suggestions for those who come across their vehicle while it is in the process of being clamped.

“Whilst not stipulated in (legislation) or the regulations, the NTA recommends that if a motorist returns while arrangements are being made to clamp a vehicle, the vehicle should be released if the clamp has not been locked,” it says.

“Similarly where arrangements are being made to relocate a vehicle, the NTA recommends that the relocation does not proceed if a motorist returns before at least two wheels have been lifted from the ground.”

The code, which is due to come into effect from next January, covers the working environment of clampers and parking operators – those who oversee the rules and regulations.

Many of the suggestions relate to the need for clampers to take detailed, time-stamped photographs of vehicles and wheels, both to prove timings and show that no damage has been caused by clamps.

In relation to the rise of virtual or internet-based parking systems, required signage should give details of network limitations, particularly where they might affect foreign drivers.

Clampers ought to try and remove the devices in less than the maximum two hours after payment in circumstances where the parking area is dark or secluded, or where a driver is elderly or with young children, it says.

The provisions cover 54 specific parking infringements set out last year which include everything from not paying to the misuse of electric charging spaces and parking in a cycling lane or tram line.