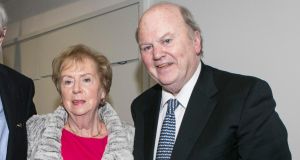 Former minister for finance Michael Noonan’s sister Mary was of the three women in their 70s killed in Thursday’s car crash in west Limerick.

Mary Noonan (78), Mount Trenchard, Foynes, and her friend Mary Costello (73), of Ballinacragga House, Foynes, died in one car after the collision 200 metres west of Loughill village on the road leading to Glin. Mary Costello’s husband, Tom, a well-known farmer, died after a long illness six weeks ago.

The driver of the other car was Meabh Bradley (77), who lived at Ballydoole, Kildimo, Co Limerick, and who is believed to have suffered a heart attack.

The only person to survive the accident is Mary Griffin (70) who was travelling with Mary Noonan and Mary Costello. She survived the impact as she was seated in the back of Ms Noonan’s car. She received serious leg and lower chest injuries and was airlifted to University Hospital Limerick by the Shannon-based Coast Guard rescue helicopter. Her husband John and family members were at her bedside yesterday.

Mary Noonan was a nurse at the regional maternity hospital in Limerick before she became the nurse at the Aughinish Alumina plant on Aughinish Island.

“Mary was always a great supporter of her brother Michael and encouraged him from the very start of his political career when he entered Limerick County Council in 1974. She was a great person out on the canvass and had a great way about her,” said a family friend.

“Because of her nursing in the maternity hospital and latterly at Aughinish, she knew a huge number of people throughout West Limerick. During his political career she was an invaluable help to Michael and we are all devastated at this tragedy,” the friend went on.

Speaking of the latest sadness to afflict the Costello family, Pat Hartney, a family friend, said: “The whole community is just totally bewildered by what has happened. All three women who died and the fourth woman who was badly injured come from this area along the Shannon Estuary.

“Tom Costello only died at Easter. He had been receiving treatment for a while at Milford Hospice in Limerick. Their family all did very well and had travelled home to be at their father’s bedside when he died. Now they will be coming back to mourn their mother Mary.”

One of her sons, Daniel, is a well-known medical consultant in Cork and another son, Barry, is a geologist based in Sardinia. Her daughters, Karen, Sarah and Emma, live in Dublin, Abu Dhabi and Sydney, respectively.

Mrs Bradley, the driver of the second car, had worked for many years as a nurse in the Middle East.

Cllr Emmett O’Brien, recently elected to Limerick City and County Council, said: “I only canvassed their house a few weeks ago. She had returned some years ago having worked abroad.

“She was one of the Kennedy family who are very well known and respected farming people in the Kildimo area. All the community is just totally devastated at the scale of this awful accident.”