Patrick Honohan asserts a ‘culture of entitlement’ remains in the sector 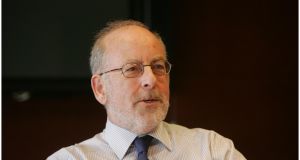 Prof Patrick Honohan, former governor of the Central Bank, has criticised the culture and practice at the regulator prior to the financial crash. Photograph: Bryan O’Brien

The behaviour of Irish banks shows there is a need for “deeper reforms in banking culture”, with lenders adopting a “high-handed” approach to customers, the former governor of the Central Bank has said.

Prof Patrick Honohan argues in a new book that banking scandals such as the tracker mortgage affair and the behaviour of banks over a period of decades show there is a “culture of entitlement” in the sector. Prof Honohan stepped down from his role in the Central Bank in 2015. He suggests there is a “long-standing culture of corporate entitlement by the banks operating in Ireland,” and that current high margins on mortgage lending suggest that such a culture persists today.

Despite the costly bailout, he says, “there remains considerable scepticism about whether the Irish financial system is delivering the optimal quality of financial services fairly and at a reasonable price”.

Overall, the record of Irish banks “suggest the need for deeper reforms in banking culture”, although Prof Honohan notes this may be an “intractable” issue. He also argues that the complexity of the financial system means that the capacity of authorities “to achieve decisive reforms of culture may be inherently limited”.

Prof Honohan also criticises the culture and practice at the Central Bank prior to the crash, particularly light-touch regulation which left lenders such as Anglo Irish Bank monitored by just two regulatory officials.

Regulators, he writes in the book Currency, Credit and Crisis: Central Banking in Ireland and Europe, were “deferential to the managers of the major banks, and lenient whenever they detected a pattern of abuse, the regulator unwittingly allowed excesses to accumulate to the point where they could threaten the solvency of the Irish State” and that the Central Bank has been characterised by a “tendency to passivity” throughout its history.

There is criticism as well for incentives for the property market introduced by Enda Kenny’s governments. The Fine Gael/Labour government which took power in 2011 “still couldn’t shake off the idea that property speculation was an essential ingredient in a successful macroeconomic recovery. It was willing to forgo future tax revenue to pump prime such speculation”. He also details how senior European Commission officials targeted Ireland’s 12.5 per cent tax rate during negotiations prior to the bailout.

Meanwhile, he says “that debt relief should have been a larger component of Irish banks’ approach to customer over-indebtedness”, and that he worked during his time in the Central Bank on a blanket debt-relief scheme, but could not identify one that would work.

There is also criticism of the Oireachtas banking inquiry, which he says “only provided glimpses of what must have gone wrong”. Those in the room on the infamous night of the bank guarantee, however, are often wrongly blamed for having precipitated the economic crisis. “They could have done a bit better for Ireland, even with the information they had, but nothing they could have done at that point would have avoided a severe economic and financial crisis on a scale comparable to that which was about to unfold,” Prof Honohan writes.

The inability of Irish banks to address the long-standing problem of non-performing loans (NPLs) is also cited as a failure of the system in the book. “Over-optimistic expectations, weak operations systems and a societal reluctance to enforce hard choices may all have played a part in the slow resolution of legacy indebtedness of households and small businesses,” he writes.

“They were penny-pinching in their reluctance to make realistic deals with over-indebted borrowers. As a result, bringing the problem of NPLs under control took much longer than hoped for.”

He also suggests that interventions in the banking market, such as the introduction of tighter rules on mortgage lending, should be retained “if, as appears, bankers cannot be relied on to operate effective risk-management systems when these interfere with the ambitions created by senior management overconfidence”.