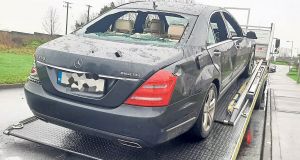 Limerick councillor Fergus Kilcoyne’s car after it was damaged outside his home in Patrickswell, Co Limerick. Photograph: Press 22

A Co Limerick councillor who owns a public house in Patrickswell, Co Limerick, has said he will not be intimidated following an early morning attack on his home by a gang.

In a 4.45am attack on Monday, the attackers broke windows in the home of first-time Independent councillor Fergus Kilcoyne, and badly damaged two family cars.

Visibly distressed, Mr Kilcoyne said that he and his wife were taking turns at night to stay on watch and guard their home.

“It’s gone that bad. No one should have to live that way. It was horrific, horrific. My wife is in bits. She is not even sleeping at night. She is sitting up at night watching out the windows so the kids can get sleep.”

Mr Kilcoyne said he, his wife, and their four children – all aged in their 20s – were asleep in their home when the attack occurred.

“The noise of breaking glass was like bullets going through the windows such was the bang. Eight or nine panes of glass went in. The cars are probably written off. There was a lot of damage, between €30,000 and €40,000 damage done in two minutes.”

Mr Kilcoyne, who has run The Dark Horse Bar in Patrickswell for the past “21 years”, attended a council meeting at City Hall on Thursday morning.

Fine Gael councillor Olivia O’Sullivan said: “We all wanted to offer our solidarity to Fergus, and show our concern for him and his wife and children, and everyone I think would agree was appalled to hear what happened.

“It’s a terrible threat on a public representative who is just doing his job and getting on with his life and business and family. It’s a threat to community, to family and also to democracy, and it is also something that can’t anyway be tolerated.”

Gardaí are taking the matter extremely seriously, and have appealed for information.

An informed source said Mr Kilcoyne has been advised by gardaí to increase security measures at his home following the attack.

Gardaí are continuing to conduct “house to house” inquiries in the area, and are “trawling through CCTV” from the surrounding area in the search for those behind the attack.

A crime scene unit carried out a “forensic examination” of Mr Kilcoyne’s home and his and his wife’s cars.

“We are taking this very seriously. We are actively investigating it,” said an informed source.

Mr Kilcoyne came close to being elected for Fine Gael to Limerick City and County Council in 2014, having secured 516 first-preference votes.