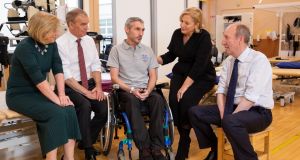 Ollie Cox’s life changed forever after he took his motorbike out for a spin one night.

From Clondra, Co Longford, he was working in the construction industry. He and his wife had two sons, and she was expecting another child.

“I am not sure what happened. It was about 9. 15pm on a lovely evening. I had been messing around. Yeah, I woke up with a crowd around me. I knew. I couldn’t feel my legs.”

Now paralysed, and with the happy arrival of a third son, he is learning to live a different life.

Launching this year’s seasonal road safety campaign in the National Rehabilitation Hospital in Dún Laoghaire, Co Dublin on Thursday, Minister for Transport Shane Ross said meeting Mr Cox and other patients was “an extremely moving experience” which he found both “tragic” and “emotional”.

Assistant Garda Commissioner David Sheahan said it was difficult for emergency service personnel to deal with “what is left after a road traffic collision”.

Statistics showed they would be called out to about 11 road deaths and even more life-changing injuries over the coming weeks, “so on that basis we have one more to come before the end of November”.

According to Moyagh Murdock, chief executive of the Road Safety Authority, 3,518 road users suffered a life-altering injury between the years 2014 to 2017.

“Death is not the worst that can happen,” said Siobhán O’Brien, who was left with a life-altering brain injury 18 years ago.

She fronted a road safety campaign explaining how she used to be a social worker until serious injuries changed her life. “The worst for me was surviving by acquiring a brain injury.”

She said in the ordinary course of events she “may have feared death by driving”, but had not feared serious injury.

Laura Doherty was a young doctor with a bright future ahead of her when she suffered catastrophic injuries in a car crash as she drove from Dublin to Sligo. She has cognitive and fatigue problems and no longer works as a doctor. “I have to say it seems like the old me died,” she said.

Garda Commissioner Drew Harris said he was committed to reducing fatalities and serious injuries on the roads. He said he believed graduated penalties were an appropriate response to speeding, and pointed out that the Garda Roads Policing Division was being increased to 1,000 officers.

He said from this coming weekend An Garda Síochána will launch its Christmas and new year road safety campaign with a strong focus on mandatory intoxicant-testing checkpoints. “Our members will be enforcing other important lifesaving legislation including the more recent safe overtaking of cyclists legislation and unaccompanied driver laws,” he said.