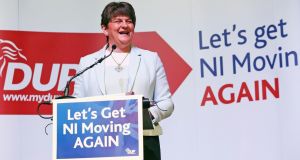 The Irish language, viewed as the key issue blocking a return to Stormont, can be resolved, the DUP leader Arlene Foster said on Thursday when launching her party’s Westminster general election manifesto. Photograph: Brian Lawless/PA Wire

The Irish language, viewed as the key issue blocking a return to Stormont, can be resolved, the DUP leader Arlene Foster said on Thursday when launching her party’s Westminster general election manifesto.

Ms Foster at the launch at the W5 science centre in east Belfast said the biggest issue DUP candidates faced on the doorstep was a demand to reinstate the Northern Executive and Assembly.

“We will be at those talks most definitely,” said Ms Foster in relation to Northern Secretary Julian Smith’s announcement on Wednesday that new negotiations to bring back powersharing will begin on Monday, December 16th, four days after the election.

The refusal by the DUP to concede an Irish language act however is widely viewed as the main reason previous such talks have failed.

“The Irish language has been made a key block by Sinn Féin. I would regret that because I do think there is a way forward through those issues, because there are those in Northern Ireland who love the Irish language,” said Ms Foster.

“We do not see the need for a full-blown costly Irish language act which would bring about discrimination against those of us who don’t speak the Irish language,” she added.

Ms Foster said that unionism was united in its rejection “of the Boris deal” on Brexit. The deal, which unionists contend will mean a border down the Irish Sea, must be changed, she insisted.

Ms Foster said that the DUP could not support a British government led by Labour leader Jeremy Corbyn.

That wasn’t just about “the various people he has associated with in the past” but about what he believed now and about his policies. “We have seen all of the coverage from the mainland about anti-semitism, and the way that has all played out,” she said.

Ms Foster also was dubious about the DUP supporting a Labour-led coalition government with someone other than Mr Corbyn as British prime minister. “If you are asking me would we support a Labour-SNP coalition I think that would be very problematic for us. We have to wait and see the outcome of this election,” she said.

Deputy leader Nigel Dodds also suggested it was “arithmetically” possible that “you could have a government led by a Tory, not necessarily Boris Johnson”.

Whatever unfolded in the election he believed the DUP, which had kept the Tory government in power through its €1.7 billion (£1.5 billion) confidence and supply deal, would continue to have significant influence at Westminster. “The DUP is still going to be a major player in the next House of Commons, no matter what happens,” Mr Dodds predicted.

Asked would the DUP attend a citizens’ assembly addressing Irish unity in the South, if it were formed, Mr Dodds said, “We will look at any proposals obviously, but we believe the way forward for any decision-making and political dialogue is through the elected representatives first and foremost, with, of course, proper dialogue, consultation and discussion with everyone who has a stake in society.”

Mr Dodds said that on polling day voters had a simple choice, “Support the party that will fight for Northern Ireland and play a full part in parliament, or see the vote split and hand victory to those who would take Northern Ireland in the wrong direction and use that victory to call for a Border poll.”

He added that a vote for the DUP “is to send a message that there can be no borders on the Irish Sea”.

Ms Foster also was asked about one recent loyalist meeting in Portadown where there was reference to a possible “armed struggle” response to the British Brexit deal. She said that the DUP Upper Bann candidate Carla Lockhart, who was present, immediately interjected when this comment was made, to insist there would be no such reaction.

“We abhor violence and the use of violence, always have done, and always will do. We do not have any truck with anybody who would advocate that sort of thing,” said the DUP leader.