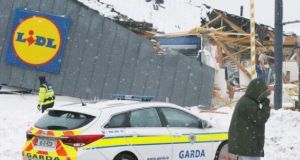 Lidl plans to completely demolish its store at Fortunestown Lane after it was looted during the bad weather last week. Photograph: Stephen Collins/Collins

Lidl is to completely demolish the remains of a store badly damaged and looted in Tallaght but said it has yet to make a decision on whether it will build a new outlet in its place.

The roof of the Fortunestown Lane supermarket was torn down by a digger during heavy snowfall last Friday night.

Gardai said the scale of the looting that followed was “unprecedented” and so far six people have been charged with related offences.

In a statement on Wednesday, the German supermarket chain said that following inspections by a team of its engineers and consultants “we have made the decision to demolish the remainder of the building in the interests of health and safety”.

“At present we are yet to make a final decision on future plans for the site,” it added.

It had been previously considering replacing the store with a larger two storey outlet but this was immediately brought “under review” following Friday’s incident.

The supermarket has also said it intends to operate shuttle bus services to alternative stores for those who need it.

“We are aware that some of our customers in the Fortunestown area are experiencing difficulty in accessing and doing their shopping in other Lidl stores in the locality after the devastating events of last Friday night,” it said.

“We have been overwhelmed by the messages of support from the community and to show our appreciation to our valued customers we will be offering a complimentary shuttle bus service from Fortunestown to our store at Whitestown Way, Tallaght.”

A mechanical digger was used to damage the supermarket’s roof and walls and then pulled a safe out of the premises. Circulated video footage showed those operating the machine pulling down the structure and then using the digger in an attempt to breach the safe.

Gardai said some looters had brought wheelie bins into the store to fill with goods.

“It was looting like we haven’t seen before. They knew they were safe, because for a long time we couldn’t get to them,” said one officer, referring to the extreme weather conditions on the night.

Last Monday employees who worked at the Tallaght outlet were told they would be redeployed to other stores.

On its Twitter account, the company said: “We won’t let the criminal actions of others impact on our hard working team.” About 30 people were employed in Tallaght.