A look back on Varadkar’s words, sometimes spoken in anger

Harry McGee meets the hot favourite to become next Taoiseach Leo Varadkar and asks him about the pressures of the job, building bridges with Simon Coveney and his plans for the first 100 days. Video: Enda O'Dowd 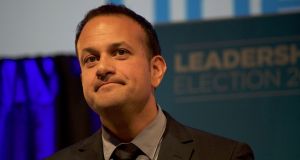 “Sir, - We are the two Young Fine Gael delegates who sucessfully proposed the new system for electing the leader of Fine Gael. We feel shocked, appalled and betrayed at the decision of the Fine Gael Parliamentary Party to elect a successor to Michael Noonan under the old, undemocratic system.

“More than ever, Fine Gael needs to consult members and councillors across the country about the future of the party and its Leadership. Clearly, the rump 31 TDs and the 14 unelectables from the fag-end of a Senate have learned nothing from Fine Gael’s mauling at the polls.

“As we write, candidates for the Leadership are already sowing the seeds of Fine Gael’s next election defeat by trading votes for votes with senators determined to make it back to Leinster House at any cost. The decision of the parliamentary party to decide the future of Fine Gael alone and behind closed doors is a disgrace and demonstrates their contempt both for the loyal Fine Gael membership and the 400,000 or so electors who voted for them. Shame on you all.” A letter from Leo Varadkar and Lucinda Creighton to ‘The Irish Times’ in June 2002

“To ask the Minister for Justice, Equality and Law Reform if he will charge prisoners for the cost of their time in prison where prisoners can afford to meet this cost; and if he will make a statement on the matter.” Parliamentary question, December 2007

“This is an appalling botch job. You’re no Seán Lemass, Jack Lynch or John Bruton. You’re a Garret FitzGerald. You trebled the national debt and effectively destroyed the country. You’ve brought us a wasteful botched job of a Cabinet reshuffle. It is the last thing you will do so you should enjoy writing boring articles in ‘The Irish Times’ in a few years.” March 2010, to then taoiseach Brian Cowen

“I spent today travelling back to Ireland, leaving Ulaan Baatar at midnight Dublin time and arriving home (without my luggage) at 9pm after layovers in Moscow and Heathrow. I really can’t wait to get the keys to one of those Government jets. My bowels aren’t feeling the may west (sic) today. Not sure whether to blame the Mongolian food or Aeroflot. ” On his personal blog in his 2009

“Marriage in our Constitution is very clear that it’s a man marrying a woman, largely with a view to having a natural family, and if they are unable to do that, obviously then they can adopt. And I would be of the view that it doesn’t have to be the case for everyone, but that the preferable construct in a society is the traditional family, and the State through its laws should protect that and promote that.” Hot Press interview, 2010

“Michael (O’Leary) needs a new song to sing. We’ve been hearing much the same old story in the past couple of years. The Ryanair position on money-grabbing is that everyone else is ripping you off whether it’s airports, governments, other airlines.” As Minister for Transport in 2012

“Speaking on my own behalf and on behalf of the thousands of families who have had to endure the pain and loss that flows from the death of a loved one on the road, I want to thank Sergeant McCabe and Mr Wilson for their service.

“They may not have got everything right but they did shine a light into a dark place and forced those who would rather turn a blind-eye to face up to the truth.

“There have been many words used to describe their actions in recent months. But if I was to use one word, the word I would use is distinguished.”

As Minister for Transport in 2014, he contradicted then Garda Commissioner Martin Callinan’s description of the actions of whistleblowers as “disgusting”

“I am a gay man, it’s not a secret, but not something that everyone would necessarily know but isn’t something I’ve spoken publicly about before.” Interview with RTÉ’s Miriam O’Callaghan in January 2015

“I consider myself pro-life, as I accept that the unborn is a human life with rights and I do not support abortion on request or on demand. I also stated and sincerely believe that this is an issue where there are few certainties and where families and doctors often find themselves having to making extremely difficult ethical and clinical decisions.” As Minister for Health in the Dáil, January 2015

“A system of Universal Health Insurance is still our preferred model to achieve universal healthcare. However, the high costs for the particular model of health insurance analysed in the new ESRI report are not acceptable, either now or any time in the future.” Effectively burying Fine Gael’s signature health policy as Minister for Health in November 2015

“There are far too many people who get up early in the morning, and work hard, who cannot make ends meet.” At the MacGill Summer School, July 2016. It was a theme he reprised during the leadership contest

“I congratulate Deputy Paul Murphy on one enormous success, though not on the role he has played in the campaign against water charges. I congratulate him on the role he has played in reducing Fianna Fáil to what it is now. The party of Lemass, which was once proud to stand up for things and would do the right things by the Irish people, now determines its policy on water solely out of fear of Deputy Murphy and of Sinn Féin.” During Leaders’ Questions in the Dáil, April 7th, 2016