'Prejudice has no hold in this Republic,' says new FG leader 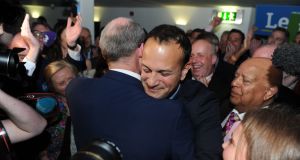 Declaring that his election demonstrated that “prejudice has no hold in this Republic”, Leo Varadkar became the new leader of Fine Gael last night, setting himself on course to become Ireland’s 13th taoiseach when the Dáil meets on June 13th.

Mr Varadkar won a comfortable 60-40 percentage majority in the Fine Gael electoral college, though his rival Simon Coveney scored a remarkable victory among ordinary party members who voted for him by a majority of 65 per cent to 35 per cent.

But Mr Varadkar won a clear majority of councillors, and romped home as expected in the parliamentary party vote, winning 51 votes to Mr Coveney’s 22.

Voting in the election was weighted, with the parliamentary party accounting for 65 per cent of the total vote, the membership counting for 25 per cent, and the councillors for 10 per cent.

Mr Varadkar, the son of an Indian immigrant, came out as a gay man during the marriage equality referendum two years ago. He turned 38 earlier this year, and will become the youngest taoiseach if, as expected, he is elected by the Dáil when it returns on Tuesday week.

Mr Varadkar will meet Fianna Fáil leader Micheál Martin in the coming days but said Fine Gael would stand by the confidence-and-supply agreement with Fianna Fáil and also by the programme for government negotiated with Independents. “An agreement is an agreement and when you make it you should stick to it,” he said.

He will need the abstention of Fianna Fáil deputies and the support of the Independents to be elected taoiseach.

After being elected leader, Mr Varadkar spoke of his father who travelled 5,000 miles to make a new life in Ireland and said that people looked to Ireland and saw that “his son was judged by his actions and character, not by his origins or identity”.

Praising the outgoing party leader and Taoiseach Enda Kenny, Mr Varadkar said that now “the torch of leadership passes to a new generation”.

He had spoken to Mr Kenny, he said, and expected to talk to him again in the coming days about the transition.

Mr Varadkar also paid tribute to Mr Coveney, saying he ran a “spirited and principled campaign”. He said he was in admiration of Mr Coveney’s “honour, talent and patience”.

Mr Coveney, who was enthusiastically received by the crowd at the count centre in the Mansion House in Dublin, congratulated Mr Varadkar and pledged to work with him “to make sure that Fine Gael politics makes this country a better place”. The two are expected to meet on Saturday to discuss the Government’s future.

A short time later, at his first press conference as party leader, Mr Varadkar said his immediate priorities would be Brexit and the relaunching of the Northern Executive, the public sector pay negotiations and a new capital spending plan.

He insisted he had “no plans” for an early election and said he expected that there would be a referendum on abortion “sometime next year”. He reiterated campaign pledges to make Fine Gael “a warm house for people who hold all sorts of views on this very contentious issue”.