Early general election will not be called, says Leo Varadkar 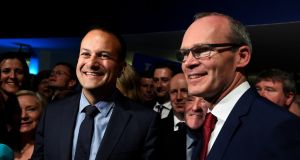 Leo Varadkar and Simon Coveney: Mr Varadkar praised Mr Coveney for his campaign and said the two would sit down and discuss the future of the party. Photograph: Clodagh Kilcoyne/Reuters

The new Fine Gael leader, Leo Varadkar, has insisted he will not call an early general election if the Dáil elects him to succeed Enda Kenny as taoiseach.

In an emotional speech after winning the Fine Gael leadership contest against Simon Coveney, the Dublin West TD said his victory demonstrated prejudice had no hold in this Republic and Ireland did not discriminate on the basis of origin and identity.

Mr Varadkar said he hoped his success would show young children they can dream big.

“I hope any child growing up looks at me and my unlikely story and my background and believe there is no office in this State that they cannot aspire to, nothing you cannot do if they believe in themselves.”

Mr Varadkar, the 38-year old Minister for Social Protection, won the leadership by taking 60 per cent of the vote in a weighted ballot in which the parliamentary party had 65 per cent of the total vote, the rank-and-file party membership had 25 per cent and councillors had 10 per cent.

He secured 35 per cent in the membership ballot, 55 per cent of the councillor vote and, crucially, he received 51 of the 73 votes cast by members of the parliamentary party.

Mr Varadkar praised Mr Coveney for his campaign and said the two of them would sit down and discuss the future of the party on Saturday.

Asked about his defeat in the ballot of rank-and-file members of Fine Gael, Mr Varadkar said Mr Coveney won the admiration of the members by showing grit and resilience to stay in the contest.

He insisted he would seek to unite the Fine Gael membership behind his leadership and give them a decision-making role once again.

Mr Varadkar acknowledged there would be significant competition for Cabinet portfolios but said he would not be in a position to satisfy all those seeking a new job. He said he did not offer anybody a job in the event of winning and did not authorise any of his campaign team to do so.

“The agreements are there and they stand. We will honour what is in those documents but that should not be the limit.”

His policy priorities would be Brexit and the position of Northern Ireland, the public sector pay deal and the new capital programme.

He said he envisaged a referendum on the Eighth Amendment of the Constitution. However he could not say whether it would be the first referendum he would oversee as taoiseach.

The Minister was surrounded by his family and partner Matthew Barrett as he was announced as the new party leader.

Outgoing Taoiseach Enda Kenny, Democratic Unionist Party leader Arlene Foster and British prime minister Theresa May were among the first to contact him with their congratulations.

Mr Coveney said he did not like losing but was humbled by the support he had received, in particular from the party membership. “This has been a good process for the party. Now we need to come together right behind him. I think he will be a great leader. I will be right behind him.”