Three men in custody after bomb found on Dublin’s northside 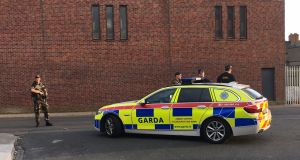 Explosive devices were discovered when gardaí stopped and searched a vehicle in Ballybough, Dublin, at about 6pm. 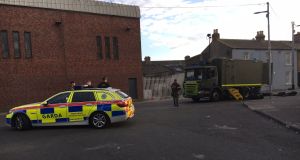 Army bomb disposal experts were called in and road closure and diversions were put in place after the discovery of the explosive device. 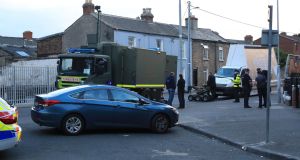 A period of detention for two men being questioned by gardaí over the discovery of explosives in Dublin has been extended.

A third man who was arrested on Friday after a follow-up search is meanwhile being detained at Raheny Garda station.

Gardaí are still questioning two men aged 21 and 28 who were initially arrested after the discovery of an explosive device in Dublin’s north inner city.

The men are being questioned under Section 30 of the Offences Against the State Act at Clontarf Garda station.

The material was discovered when gardaí stopped and searched a vehicle on Spring Garden Street, Ballybough, at about 6pm on Friday.

The third man, aged 55, was arrested and he is detained at Raheny Garda station under Section 30 of the Offences Against the State Act.

The seizure and arrests are part of an ongoing operation into the activities of dissident republicans.

Gardaí are investigating whether suspected dissidents were working for one of the factions involved in the Kinahan-Hutch feud.

Army bomb disposal experts were called in and road closure and diversions were put in place. Gardaí went door-to-door alerting residents to what they suspected to be explosive material in the car.

A number of children had been playing on a bouncy castle in their front garden, near where the vehicle was stopped by gardaí. The children were evacuated from the area along with other residents, and gardaí cordoned off the road.

One resident who did not wish to be named said he was in his kitchen when he got a knock on his door from a garda, telling him there was a bomb alert and he had to evacuate his house. “It could have been worse. There were children playing on the street. So thankfully no one was injured,” he said.

Sinead Cullen, who lives on Spring Garden Street, said she came home from work to find her road closed off. “I was driving home with my two children, my husband is in the house. They evacuated the main road. I thought there had been an accident or a shooting, because that’s become the norm around here.”

Gardaí also searched a house on the Ballybough road.

Responding to reports that the explosives may have been destined for Northern Ireland, the Ulster Unionist Party’s justice spokesman Doug Beattie said the discovery had undoubtedly saved lives.

“The seizure by the Garda of 5kg of semtex and other military-grade items in Dublin on Friday evening will be welcomed by all politicians and political parties who respect the rule of law and who repudiate the use of, or threat of violence for political ends,” he said.

“I note that the Garda have said the explosives were destined for use in Northern Ireland. Given the devastation caused by semtex in the past, and the despicable and reckless use of explosives by republican bombers - not least in Omagh in 1998 - it is clear to me that lives have been saved by this seizure.

“I commend the Garda for their excellent work. Strong sentences must be imposed on any terrorists north and south of the border, to act as a real deterrent and send a message that terrorism will not be tolerated.

“Anyone who seeks to use force to impose their will on the wider community must be removed from circulation and sent to prison for the maximum possible length of time. The only consideration must be the protection of innocent lives.”