Lemass told Haughey he would be foolish to take ministerial role 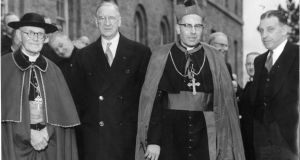 Seán Lemass told his son-in-law Charles Haughey that he would be a “fool” if he took a position equivalent to today’s minister of state post.

Shortly after he became taoiseach in June 1959, Lemass appointed Haughey to the position of parliamentary secretary at the Department of Justice to aid the incumbent minister, Oscar Traynor, who was ill.

In 1951 Haughey married Lemass’s oldest daughter Maureen. He became a TD in March 1957 and rose rapidly through the party ranks. He was also involved in his own accountancy firm, Haughey, Boland and Co.

Lemass was reluctant to appoint Haughey lest he be accused of favouritism. He wanted Seán Flanagan, but his cabinet wanted Haughey.

Lemass gave a series of interviews between 1967 and 1969 to an admirer, Dermot Ryan. The tapes are being made available for the first time through The Irish Times.

On the audio, Lemass recalls: “I felt from his own personal point of view that he would be very unwise for him [Haughey] to give up all his business associations to be parliamentary secretary.

“I brought him in and told him that the cabinet was offering him this job. And that it was my duty as taoiseach to ask him to do it and my duty as his father-in-law to tell not to be a fool.”

Lemass was certain he made the right choice. “Once he had broken through there was no question of any restraint in further promotions for him.”

He suggested that at times Haughey seemed to be a man who appeared to be “too much on top of his job”.

Lemass spoke on the tapes about the toll that politics took on his family life. One of his daughters – she is not named, but it may have been Maureen – was approached by the reverend mother in Muckross Park College where she attended school.

“Tell your father to do this,” the nun told Lemass’s daughter, to which the reply came, “I can’t. I don’t know him well enough.”

Lemass noted that his son-in-law had a similar attitude to family life. “I see him in much the same situation reproducing my life all over again in himself, although he does much more in the way of social entertaining than I ever did,” he told Ryan.

“He would be different in the sense that, on the whole, he would prefer not to have to stay at home. He is a restless type of person and would never stay at home reading a book as I would. If he found he had nothing to do at home he would go out.”