Dublin rickshaws could hit the brakes over drug-dealing 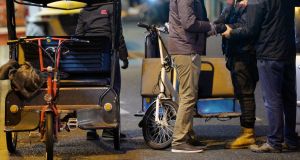 Drug-dealing among Dublin’s rickshaw drivers is rampant and has become normalised, a key member of the Garda team involved in a concerted operation to tackle the issue has conceded.

Gardaí have arrested 154 rickshaw drivers since January 2016 under offences related to section 15 of Misuse of Drugs Act in the Dublin City B District, covering the Pearse Street area.

The Dublin South Central District Drugs Unit has been running targeted operations with assistance from the National Drugs Unit, the South Central Task Force and Garda units in Pearse Street.

The operations involve squads of up to six or seven gardaí, who watch people going up to rickshaws to buy drugs, identify specific rickshaws that are selling drugs and interrupt transactions, arresting the dealers.

Specific operations are run on rickshaw drivers every two to three weeks as well as smaller operations at night-time between Thursdays and Saturdays, Sgt Walsh says. Those operating the rickshaw drug trade are a “very transient population”, with those involved often staying in Ireland on short-term visas.

“As new people are coming into the rickshaw business, they’re taking it on and probably bringing it further. In recent times, some of the street seizures were getting of increasing size,” he said, noting the Garda operations are resource and labour intensive.

“There’s a big impact on our work generally. The bigger guys that we’d be looking after, it takes away from that as well,” he said. “Something needs to be done, whether it’s prohibition or regulation. If they were to continue in their current form, the same pattern will continue.”

Sgt Walsh cited the lack of safety regulations and vetting of rickshaw drivers. “It wouldn’t be acceptable in any other profession.”

Minister for Transport Shane Ross told an Oireachtas Committee last Wednesday that a ban on rickshaws in Ireland would be a “significant step forward in managing the risk for public safety”.

Although rickshaws arguably meet a niche transport demand in Dublin city centre, the implementation of a licensing regime to regulate rickshaw drivers and operators would be a more substantial cost to the State than prohibition, he said.

We don’t mind paying taxes, we don’t mind if we need a licence plate or anything, we just want to work and people love it

“Regulating for a very small group of people is extraordinarily difficult and will take a lot of resources continuously. Banning them in their present form will be difficult legally and that’s the only thing stopping us,” he said in an interview on RTÉ’s Today with Seán O’Rourke last week.

He said he would consult with the Attorney General about the proposal of prohibition and expects to announce a decision before the end of the Dáil term.

The Minister cited the results of a public consultation on rickshaws in Ireland, released by the National Transport Authority last year. Of the 4,727 respondents to an online survey, 54 per cent supported prohibiting rickshaws and 37.7 per cent thought they should be regulated.

Mr Ross took two trips in rickshaws for research recently and described the experiences as shocking at the Oireachtas Committee meeting. He said the price was arbitrary and the driving was reckless. “This person broke virtually every rule in the book. They were going on the footpath along Stephen’s Green at great speed ... treated red lights as if they didn’t exist, drove on the tramlines.”

Lucas, a 25-year old rickshaw driver, said very few accidents occur directly because of rickshaw drivers. “We can’t deny sometimes we do break some traffic rules, but we try to be safe.”

Prohibition “makes no sense”, he said. “Every European capital and even some small cities have rickshaws. We don’t mind paying taxes, we don’t mind if we need a licence plate or anything, we just want to work and people love it.”

Another driver said the outlawing of rickshaws would be “very unfair”, as they help ease traffic congestion in Dublin city and are an environmentally friendly mode of transport. “We want to pay taxes. Lots of us are really honest, lots of us enjoy doing this,” said Rodrigo Albuquerque (40).

I think it’s a little bit extreme to be having an outright ban on them. Ultimately, the way to go is look at how we regulate the sector

Rickshaw drivers should be more regulated, for example by making a “special licence” mandatory, but an outright ban is not the right thing to do, according to fellow driver Samuel Rossi (28). “People have fun in a rickshaw,” he said, describing working in Dublin at night as “very vibrant”.

Although rickshaw drivers who sell drugs are a minority, Irish drug laws are not harsh enough to deter them, according to Rossi. “The risk is low. You go in the courts and pay a fine. They don’t go to jail; it never happens.”

Mr Ross appears to have support from many, including taxi driver representative group Tiománaí Tacsaí na hÉireann. “At the moment, if the proposal by the Minister is to ban them, that’s what we’re supporting, but if he chooses to regulate them, we would expect the highest form of regulation,” said group chairman David McGuinness.

Meanwhile, a spokesman for the National Transport Authority said it had “no issue” with prohibition.

However, Dublin Chamber of Commerce cautioned that if Dublin City Council continued to develop more pedestrianised areas, such as the proposed College Green plaza, is would become harder and harder to move around the city centre in a taxi.

“Things like rickshaws might actually offer a solution,” said the chamber’s head of public affairs, Graeme McQueen. “We might actually need them more as time goes on, so I think it’s a little bit extreme to be having an outright ban on them. Ultimately, the way to go is look at how we regulate the sector.”